December 12, 2013 – After months of training, the crew of Coast Guard Station Wrightsville Beach, N.C., finished qualifying on their 45-foot Response Boat – Medium, the 126th of 170 response boats being delivered to the service.

The 45-foot Response Boat – Medium replaces the 41-foot Utility Boat, which has been the Coast Guard’s workhorse of the fleet for more than 25 years.

The response boat’s top speed of 49 miles per hour gets the boat’s crew to the scene faster and reduces crew fatigue. The new design includes a full cabin to protect the crew from the elements, provides heating and air conditioning and features shock-mitigating seats.

The response boat is also more maneuverable, can accommodate light machine guns and its propulsion system complies with Environmental Protection Agency and International Maritime Organization emissions standards. It boasts an advanced navigation system and a communication system capable of interacting with other federal, state, local and homeland security partners.

Take a look at this video feature for a glimpse at the station’s training and the capabilities of the response boats. 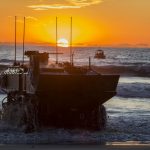