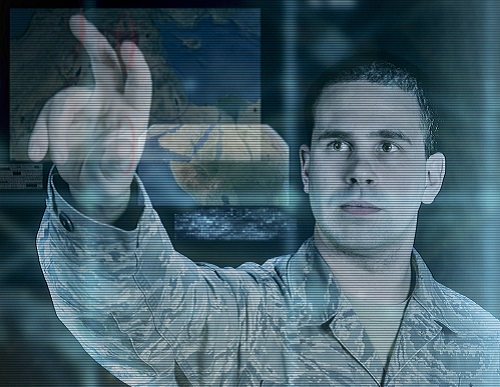 FEBRUARY 23, 2016, JOINT BASE MCGUIRE-DIX-LAKEHURST, N.J. – Closed off from all non-essential personnel in a secured, vault-like work environment known as a Sensitive Compartmentalized Information Facility, the 204th Intelligence Squadron is a mystery to those outside the squadron.

Who are they? What is their mission? What have they accomplished? How have they proven to be a vital part of not only the 108th Wing, but the whole United States Air Force?

Commanded by Lt. Col. Robert M. Kelly, the 108th Wing unit consists of 79 Airmen, 65 intelligence personnel – 13 full-time and 14 support personnel – six full-time, who work within the 8,000 square foot SCIF allowing the Airmen to be in a self-contained intelligence unit.

“When I came on board, I identified some of the issues within the intelligence community, lobbied with AMC and NGB and promised we could do more, and then expanded our support,” Kelly said.

From those beginnings, both the 204th and their mission grew.

According to Col. Keith E. Andrews, AMC’s Director of Intelligence, Surveillance and Reconnaissance, the 204th has “revolutionized intelligence,” and “we cannot function without the 204th.” From designing new and innovative technological systems to providing training for other units all over the country, the members of the 204th have transformed the way intelligence squadrons operate, train and perform their missions on a day-to-day basis.

At one point, the 204th split the most important responsibility of briefing risk assessments 50/50 to the 18th Air Force commander with another unit.

“It’s a matter of seeing a need, identifying it, lobbying for it and confirming that we have the manpower and resources to complete the new tasking, as well as the new mission,” Kelly said.

“We developed a level of trust, that not only can we do our mission, we can do more,” explained Kelly.

After lobbying with AMC and the National Guard Bureau to expand the level of support the 204th provides; the 204th is now entrusted with completing 100 percent of the risk assessments. “I couldn’t have done that if I didn’t know we had the high caliber of people and high level of morale that we have,” Kelly said.

Five years ago, the Air Force relied on another source for its visual recognition training products, which cost them about five million per year. Fortunately for the 204th, that source no longer provided those products and AMC asked if they could take over and handle it. The 204th stepped up to the task and exceeded expectations all while being more cost efficient.

Using existing software as well as creating new software, Tech. Sgt. Jason Valleley, 204th intelligence analyst, headed the development for a way to use classified Google Earth with integrated intelligence gathered from multiple sources to aid United States’ military units all over the world. Through the design process, Valleley explains that he “used information from risk assessments and visualized everything I could from travel warnings to the ‘enemy IADS’ (Integrated Air Defense System), which is basically all of the range rings from different missile systems, radars, guns, etc., to create a program that allows you to visualize the words you see on an actual map.”

All Department of Defense or civilian employees with access to the secret internet protocol router network are able to download this software and access the information provided. Details showing population information, infrastructure, government, airfield threats, base attacks and 3-D replicas of airfields are just a few examples of the intelligence information accessible with this program. Using Google Earth, this software shows where every aircraft is and where it’s produced, as well as details on aircraft in production. With 3-D models from Insight, it allows the viewer to analyze aircraft using a 360 degree view and intercepting view (up and down, side by side). This helps DoD personnel to identify aircraft in real world situations.

Intelligence on approximately thirty countries has currently been inputted into this Google Earth program, and one to four more countries are being added every month. To assist those using the program for their intelligence operations, the downloaded versions stay updated with the live one. Information is pulled from different sources automatically and stays as current as possible with the ever changing threats and intelligence analysis.

This Google Earth program allows users to get an overall picture of real-world situations that are kept as up-to-date as possible. However, it is not as precise as the officially sanctioned program, Falcon View, which is used for targeting and mission planning. Falcon View has the ability to allow the user to enter in exact coordinates and pinpoint four corners of a building, whereas the Google Earth program is mainly an overall view of the area and information. Although the Google Earth cannot be used when planning missions, it can help DoD users visually see everything on a virtual map that is user-friendly and interactive.

The technological advances that the 204th members are making within the intelligence community are outstanding. Master Sgt. Sean Cooper is modifying software for aircraft and weapons systems. This program will provide the user with a 360 degree virtual tour inside the aircraft along with technical information and interactive software instead of having to read through texts.

“We create it so other units don’t have to and we provide the training materials,” Walsh said.

Walsh created this program to act as an interactive kiosk mode with icons to click to take the user directly to the information he/she wants to talk about right away during briefings. The first version has recently been released.

“We are waiting for feedback to see if it is useful,” Walsh said. If the program proves to be helpful and user-friendly to other units, the 204th has plans to continue to use this program when designing TOD briefings.

Due to the great success of the 204th and its capabilities, the Air Force plans on creating similar units to further the Air Force’s military intelligence community. In fact, the 137th Air Refueling Wing, Oklahoma Air National Guard, is in the process of transitioning to an Air Force Special Operations Wing and will be adding new tactical intelligence, surveillance and reconnaissance aircrew members.

With an aggressive approach to improve the quality and quantity of products and reputation, Kelly explains, “I can’t do it without the folks here. They need to be highly motivated and have a high level of morale; how else could we get 30 people to do sumo wrestling for PT (physical training)!”

Look for part two of this story on the 204th Intelligence Squadron in a future issue of Wing Tips!