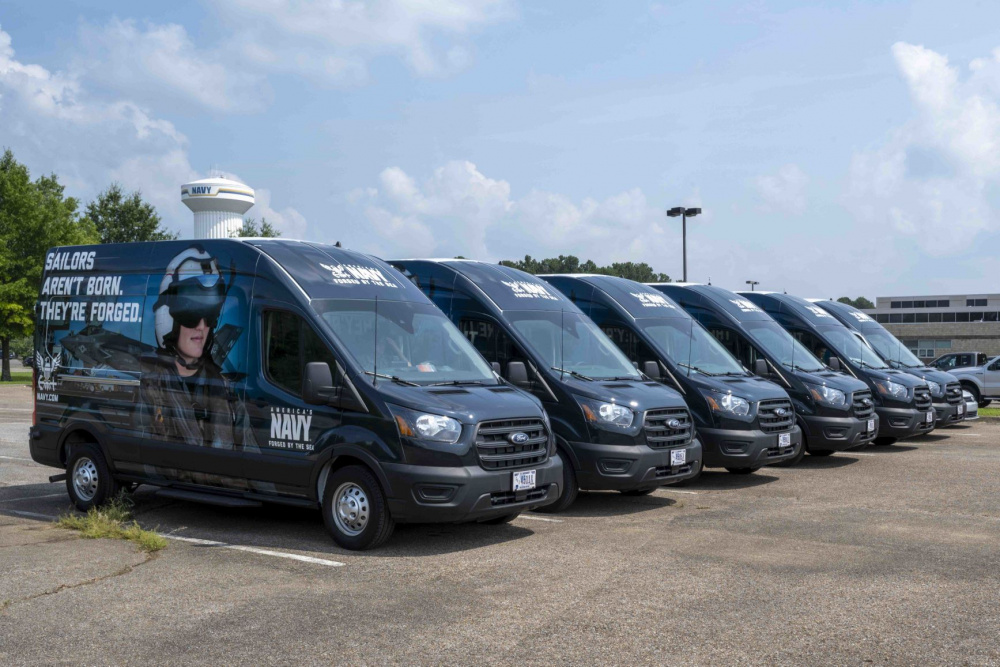 AUGUST 17, 2021 – Navy recruiting experienced many challenges this past year and a half while operating under a pandemic. Recruiters needed to be flexible, which meant having the right tools, at the right place, at the right time. As one answer to that need, Commander, Navy Recruiting Command, Rear Adm. Dennis Velez, as part of his second year priorities, called for the release and employment of Mobile Engagement Vehicles (MEVs).

MEVs are currently in the process of being distributed to each Navy Talent Acquisition Group across the nation. MEVs are vans equipped with tools for recruiters to implement in their day to day efforts. MEVs are currently being shipped out with a tent, display table and flags, ready to be set up at any event to aid recruiters.

The idea for the MEVs stems from the Nimitz 18 wheeler currently being used by recruiters across the nation to engage with audiences. The Nimitz has features that include digital data capture, a virtual reality mission, photo opportunities and more.

“The Nimitz is one asset and it is in high demand from coast to coast,” said Cmdr. Scott Milliet, NRC advertising and marketing operations officer. “Sometimes the Nimitz is just too large to bring to events. MEVs allow recruiters to expand efforts of the Nimitz with more availability to the NTAGs and access to more locations and venues.”

One of the first NTAGs to get use of the MEV is NTAG New England. They began their use of the MEV by picking it up in Millington and driving it back to their home base. Along the way they made social media posts using #PATRIOT to build a following. They stopped at various landmarks in the Northeast and shared their experience with their followers.

“We also started a planning calendar to track and ensure constant use at venues where recruiters can interact with our target audience across New England,” said Chief Mass Communication Specialist Joshua Wahl, public affairs officer for NTAG New England. “We have a close relationship with the USS Constitution and also continue to focus the MEV usage in communities with limited exposure to Navy opportunities.”

NTAG New England will often bring the MEV to the USS Constitution. Together they help align opportunities and amplify their message to the public. Recently, they held a Medical Corps commissioning ceremony aboard the USS Constitution and they plan to have many more events with the ship in the future.

While the deployment of the MEVs is still in the early stages, there is already brainstorming going on behind the scenes for an MEV 2.0. The MEV 2.0 would take the MEVs from the NTAGs and enhance their capabilities. This could include things such as installing some type of monitor that could be visible from the back once the doors are open. Enhancements like this could have potential to further help recruiters and their mission.

NRC consists of a command headquarters, three Navy Recruiting Regions, 26 NTAGs, and 64 TAOCs that serve more than 1,000 recruiting stations around the world. Their mission is to attract the highest quality candidates to assure the ongoing success of America’s Navy.