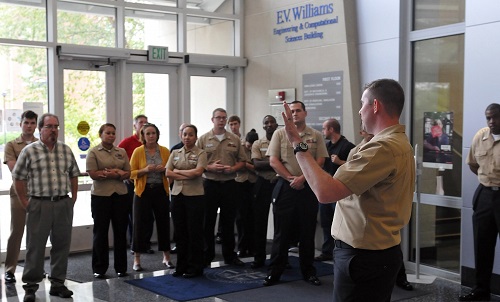 MAY 12, 2017, PACIFIC OCEAN (NNS) – Representatives from Navy Warfare Development Command (NWDC) embarked aboard the guided-missile cruiser USS Bunker Hill (CG 52) to demonstrate and test the GunnAR helmet, an augmented reality (AR) combat helmet prior to the start of Exercise Trident Warrior 2017 (TW17), April 28 to May 1.

The combat heads up display (HUD) has undergone extensive testing and design refinement over the last year within the Space and Naval Warfare Systems Center Pacific Battlespace Exploitation of Mixed Reality (BEMR) Lab to prepare for demonstrations like the one currently underway on Bunker Hill. BEMR Lab scientists developed GunnAR to best meet the needs of the warfighter and the data collected during TW17 will help define any necessary modifications.

GunnAR utilizes a helmet with an AR underlay that allows personnel manning naval gun systems as well as the gunnery liaison officer to experience heightened, integrated visual and audio coordination in order to identify, track and fire upon targets.

Gunners can also use a full infrared suite to identify targets in low visibility or nighttime scenarios. The gunner’s helmet relays the information to a tablet.

“The HUD lets you know when to track, follow, and fire. It also gave real-time video to the tablet operator, which in turn cut down on how long it would take to pass along information,” said Gunner’s Mate 2nd Class William Sluyter, assigned to Bunker Hill. “When we did our debrief with the GunnAR personnel, we provided them with ideas for some watches. For example, this system would be useful to have in port as it gives real-time imagery to personnel handling the tablet, such as the officer of the deck or the anti-terrorism tactical watch officer.”

GunnAR creates new possibilities for the Navy when it comes to responding to potential threats.

According to McClenning, GunnAR gives personnel wearing the helmets a quicker response time to threats and greater situational awareness.

Trident Warrior (TW) is an annual large-scale at-sea field experiment co-led by NWDC, Space and Naval Warfare Systems Command (SPAWAR) and Commander, 3rd Fleet. TW explores innovative solutions through fleet experimentation and puts emerging technologies and doctrine into the hands of the fleet for evaluation in an operational environment. TW17 phase one was executed from May 1-12 and phase two will begin July 5 and end August 21.