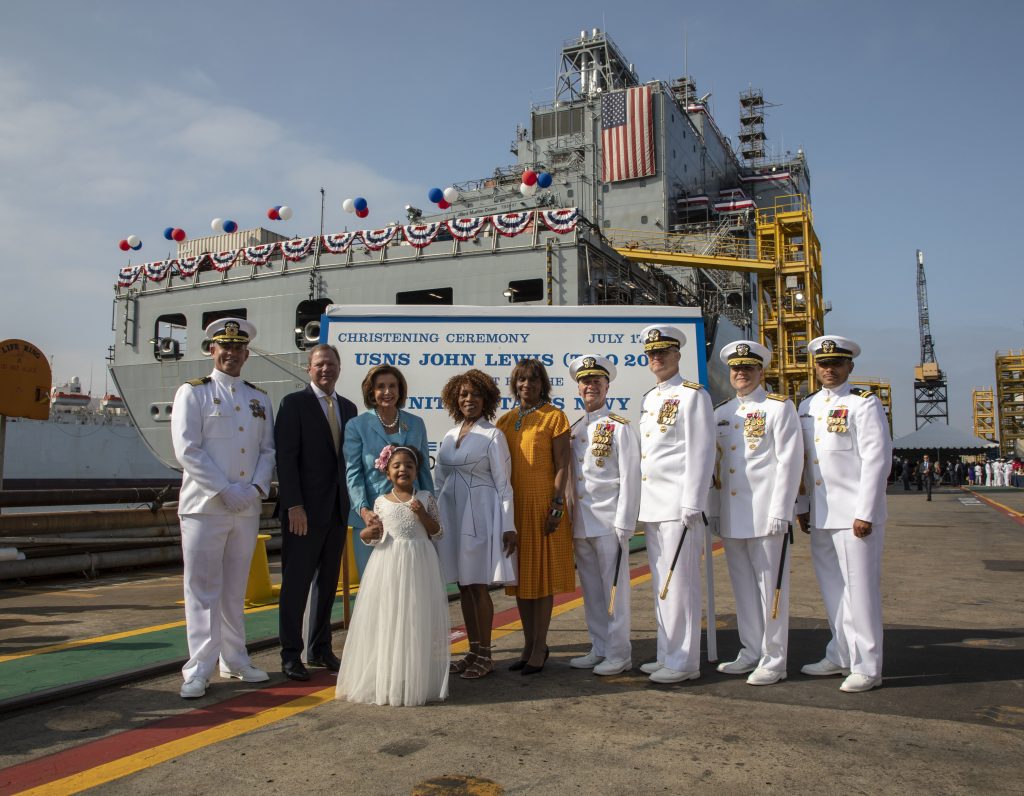 House Speaker Nancy Pelosi (D-CA), served as the principal speaker at the ceremony.

“As House Speaker, I am deeply honored to lead this Congressional delegation of many friends of our beloved late Congressman John Lewis to honor his beautiful and saintly life,” said Speaker Nancy Pelosi. “John Lewis was a warrior for freedom and, as a titan of the civil rights movement, his courage and goodness helped transformed our nation. In the halls of the Capitol, he was fearless in his pursuit of a more perfect union, whether fighting to defend voting rights, end anti-LGBTQ discrimination or respect the dignity and worth of every person.”

John Lewis “lives in the unalterable truths he spoke to power,” said Spencer. “John Lewis lives in all those spaces where people reach out their hands to pull others up to the lives that they deserve. And now he lives in the name and the embodiment of this mighty sailing vessel and its mission of fortifying and sustaining those who have committed themselves to the service of our nation.”

Following her remarks, Spencer christened the ship with the traditional champagne bottle break alongside the hull.

“The christening ceremony today takes on a very special meaning, for it marks the one-year anniversary, to the day, of John Lewis’ passing.” said Carver. “Just as its namesake, this majestic vessel will be instrumental in shaping the future of our Nation. The shipbuilders of NASSCO are proud to ensure Congressman John Lewis’ legacy will live on in this ship.”

Former Secretary of the Navy, Ray Mabus, declared the John Lewis-class of oilers be named after leaders who fought for civil and human rights. The class and the first ship honors Congressman and American civil rights leader John Lewis.

In 2016, General Dynamics NASSCO was awarded the contract by the U.S. Navy for the detailed design and construction of the next generation of fleet oilers, the John Lewis-class (T-AO 205), previously known as the TAO(X). The contract calls for the design and construction of six 742-foot-long oilers with a full load displacement of 49,850 tons. Designed to transfer fuel to U.S. Navy carrier strike group ships operating at sea, the oilers have the capacity to carry 157,000 barrels of oil, a significant dry cargo capacity, aviation capability and up to a speed of 20 knots.