The Dry Dock 1 area was originally built during World War II to supplement submarine production, and this $1.7 –billion, 7-year construction project will modernize the historic dry dock, enabling Portsmouth Naval Shipyard to meet the Navy’s needs for decades to come. The multi-mission dry dock provides increased capacity for accommodating three Los Angeles or Virginia-class attack submarines at once for repair, maintenance, and modernization.

“Our Sailors and Marines put themselves in harm’s way every day to protect our national security interests … we owe it to them to be the best prepared and equipped force in the world,” said Del Toro.

Emphasizing the growing threats around the world, Del Toro expressed how a robust Navy plays a vital role today and in the future. “This is a significant investment by the American people, and because of this investment, they can sleep more securely, because they’ll know our attack fleet can rely on quick and available maintenance and repair.”

The project is part of the Shipyard Infrastructure Optimization Program (SIOP), which is a joint effort between Naval Sea Systems Command, NAVFAC, and Navy Installations Command to recapitalize and modernize the infrastructure at the Navy’s four public shipyards. The agenda includes repairing and modernizing dry docks, restoring shipyard facilities and optimizing their placement for efficiency, and replacing aging and deteriorating capital equipment. For more information about SIOP, visit https://www.navsea.navy.mil/Home/Shipyards/SIOP/.

Portsmouth Naval Shipyard is America’s leader for attack submarine maintenance, repair, and modernization. The on-time completion of submarine availabilities is critical to maintaining the U.S. Navy’s maritime superiority. As a NAVSEA-operated field activity, Portsmouth is committed to expanding our undersea advantage and maximizing the material readiness of the fleet by safely delivering first-time quality, on time, and on budget. 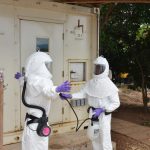 OCTOBER 17, 2021 – Throughout the year 2021, the Department of Defense’s Cooperative Threat Reduction (CTR) Program will celebrate 30 years of collaboration with foreign partners to address the proliferation of weapons of mass destruction (WMD) by securing and eliminating chemical, biological, and nuclear weapons and preventing proliferation of such weapons components, weapons-related materials, technology, […]