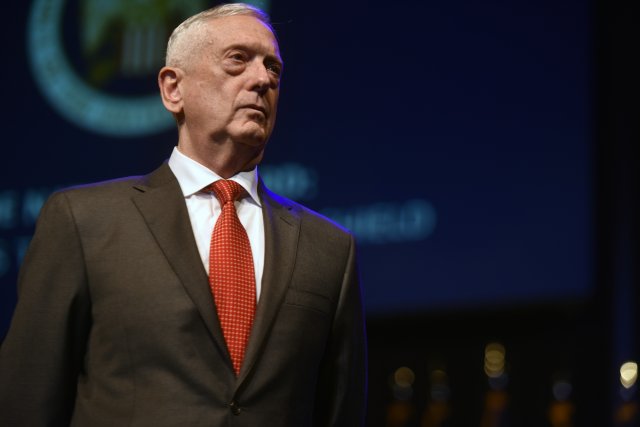 The secretary spoke in New Orleans to the 140th General Conference of the group.

The secretary used his speech to describe how the National Guard fits into the strategy. Great power competition with China and Russia has replaced terrorism as the primary focus, he said, adding that the U.S. military continues the fight against terrorists.

‘WE’RE GOING TO RESTORE READINESS’
Moving to this priority means restoring military readiness across the board, the secretary said.

He noted the American Revolution would have failed without help from allies like France.

The third line of effort is to reform and modernize DOD for greater performance, accountability and affordability, Mattis said. This strategy is key to gaining bipartisan support for the military on Capitol Hill, he said. He noted that 87 percent of Congress approved the recently passed National Defense Authorization Act.

But the key to the strategy is a lethal military force, he added. “We Americans have no God-given right to victory on the battlefield. So we need you, my fine young National Guardsmen, at the top of your game,” Mattis said. “Lethality begins when we are physically, mentally and spiritually fit to be evaluated by the most exacting auditor on Earth — and that auditor is war.”

The secretary added, “Readiness is being most ready, when our country is least ready. And, readiness depends on preparation.”

He pointed to the World War II battle for Bataan and the first months of the Korean War as examples of what happens when military readiness is lacking. Leaders must exemplify this readiness, Mattis said, and hold their personnel to the standards.

The National Guard is uniquely prepared to help America build alliances, Mattis said. He praised the State Partnership Program. Mattis spoke about the state partnership between Argentina and Georgia, Chile and Texas, Colorado and Jordan and Alaska and Mongolia.

“This is not a one-time mission and the Guard is uniquely suited to sustain allied efforts over many years, thanks to the amount of corporate continuity you maintain in your ranks,” he said.

Mattis said building alliances is a two-way street, and he urged the Guardsmen to listen and learn from foreign military partners.

“Recognize that not all good ideas in warfare come from the nation with the most aircraft carriers,” he said. “When the tough times come and the thin veneer of civilization is stripped away from us we are tempted to close ranks, interacting only with those who look like us, dress like us, speak like us and think like us. You must not fall into that trap.”

Mattis said even the closest allies will disagree at times, and the United States has dealt with this in the past. He noted the disagreements that led to the Suez Crisis of 1956 and the discussions around deploying nuclear capabilities in Europe in the 1970s.

Those who believe today’s disagreements are unprecedented have not read history, he said.

Even with disagreements, “we have always been able to fight together on the battlefield with like-minded nations,” Mattis said. “There is nothing new under the sun.”