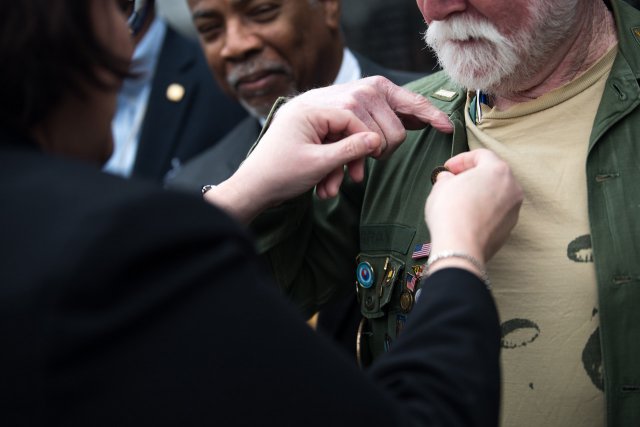 At “The Wall,” as it’s commonly called, a number of veterans were awarded Vietnam Veteran lapel pins by Kim Joiner, the acting principal deputy assistant to the secretary of defense for public affairs, on behalf of the Defense Department. Joiner also participated in a wreath-laying event at the memorial.

One of the veterans being honored was Duery Felton Jr., who served in the Army in Vietnam from 1966 to 1967.

He was just 19 when he got to Vietnam after being drafted. “Vietnam stole my youth,” he said, adding that he has mixed feelings about his experiences there.

He was a radio telephone operator in the 1st Infantry Division with the rank of specialist 4.

The moment that stands out most in his mind, he said, is when his platoon was ambushed. During the ensuing firefight, he said he lost many comrades, all of whose names are inscribed on The Wall that he now stood beside.

During monsoon season in another firefight, he remembered rivulets of rainwater turned red from the blood.

Before returning home, Felton said, his leaders warned him not to wear his uniform in public because of the war protesters and the harm that might come to him. “Coming home was a culture shock,” he added.

After returning home, Felton used his G.I. Bill to go to college. A number of other Vietnam veterans were in college with him, and he said he noticed a high level of maturity these veterans displayed compared to the other students. Vietnam had that positive effect as well, he noted.

Gary Tallman, executive director of VA’s Office of Public and Intergovernmental Affairs, also attended the event. He said VA is committed to helping veterans to heal and “is proud to partner with DOD for this noble mission to support communities — large and small alike — throughout the nation to thank and honor thousands of Vietnam veterans and their families.”

During this, the second anniversary of National Vietnam War Veterans Day, VA and DOD are supporting more than 1,600 similar events in many states across the nation, he noted.

The recognition is extended to men and women who served on active duty in the U.S. armed forces from Nov. 1, 1955 to May 15, 1975, whether in peacetime or war. Nine million Americans — about 6.4 million of them living today — served during that period.