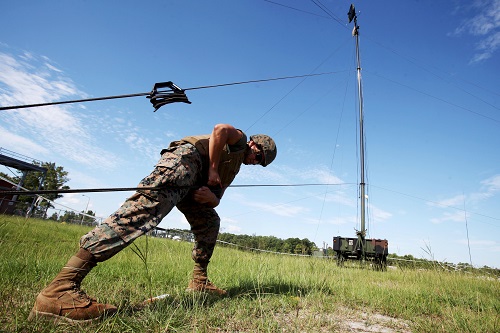 The two-week exercise occurs annually to satisfy training and readiness requirements and serve as an opportunity for the Spartans to reaffirm previously learned skillsets.

“We have different sections of Marines handling a variety of aspects for communications working together,” said Gunnery Sgt. Curtis Myers, the staff noncommissioned officer in charge of the exercise for Alpha Company. “We have a transmissions section that locks-on to satellites for us, radio Marines that handle our single channel radio networks with the wire sections handling telephone support from the field and data Marines setting up internet or internet based capabilities.”

According to Myers, once a fully operational capable date is set in stone, failure is not an option.

This field exercise allowed Marines to enhance and reaffirm lessons learned during previous training. By conducting this exercise the company of Marines was able to showcase their ability to support units while forward deployed and affirm their state of readiness.

While conducting the exercise, Alpha Company aimed to simulate a deployed environment throughout the exercise. By simulating being forward deployed, Marines are able to gain knowledge that will be beneficial when put in a real world situation.

Myers said it was important for the junior Marines to get hands-on experience, but no matter what, there’s always room for improvement.

“It’s very important to simulate that deployed environment,” said Myers. “It’s very different having to set up inside a building opposed to in a tent.”

A problem often faced when working from tents, as opposed to cement buildings, is unpredictable weather. Wind, water, and other elements can impact the care of the equipment.

According to Cpl. Michael Lorrey-Every, a data systems technician with MWCS-28, without communications, coordination in the field almost comes to a halt.

“It’s the little things like making sure cords are plugged into the right ports and getting the Marines used to what they need to be looking for when troubleshooting,” said Lorrey-Every. “We want to uphold our training and readiness standards. [The field exercise] gives us the opportunity to be tested and ready when we come across unexpected situations in the field.”

With multiple facets of communications equipment needed to work in-sync, the Marines benefit from an increased workload to heighten Marines’ skillsets.

“Marines who aren’t directly involved with communications may not realize there’s a lot of work that goes in to establishing communications,” said Myers. “Call for fires, medevacs need communications to communicate back and forth to talk between the infantry side and wing side so they know where they need to go and where the planes are at. Until you go out and do it, you don’t see the reasoning for it.”