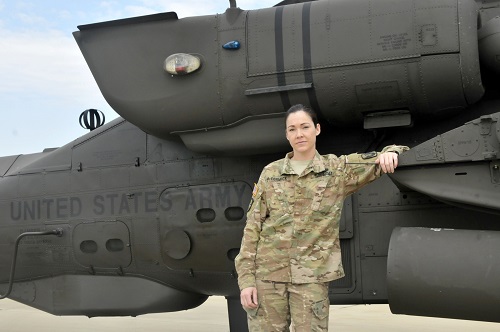 “I never set out to be the first female to do something. I’ve always been really headstrong,” she said. “It was a lot of weight on my shoulders because if I failed it would be like all females failed because I was the one and only from Mississippi.”‬

McCormick is stationed with Company A, 1st Battalion, 149th Aviation Regiment in Tupelo, Miss.‬, which flies the AH-64D Apache Longbow.
‪
“I can see her having a great impact on the Alpha Company, Punishers, and the Mississippi National Guard,” said 1st Lt. Rudy James Pyron, company commander.

‪McCormick did not always want to be a Mississippi National Guard Apache pilot.

‪”I missed that sense of family and camaraderie (that you find in the military),” she said.

During her time in the National Guard, McCormick has deployed twice – to Iraq in 2009-2010 as a military police officer with the Clinton-based 114th Military Police company, and to Afghanistan in 2013 as a public affairs sergeant with the Jackson-based 102d Public Affairs Detachment.
‪
As a public affairs sergeant, McCormick patrolled with the infantry and documented key leader meetings with photographs, some of which were published in national and international publications, which helped keep media attention on the U.S. mission in Afghanistan.

“On my Afghanistan deployment, I was flying around, feet dangling out the side of a Back Hawk (helicopter),” said McCormick.‬

She decided then she wanted to be a pilot and began to plot her career path to get there. Since only officers could become pilots, her first step was to become one.‬

‪Her future plans for civilian life will be to put her piloting skill to use for a law enforcement agency, said McCormick. She will finish her Bachelor’s degree in psychology from the University of Mississippi in 2017. She would also like to work with combat veterans.‬

McCormick has served in the armed forces for nearly 14 years. While she has held a variety of positions with the military, her recent achievement of becoming the first female in MSARNG to be an Apache helicopter pilot stands out as one of her biggest accomplishments.