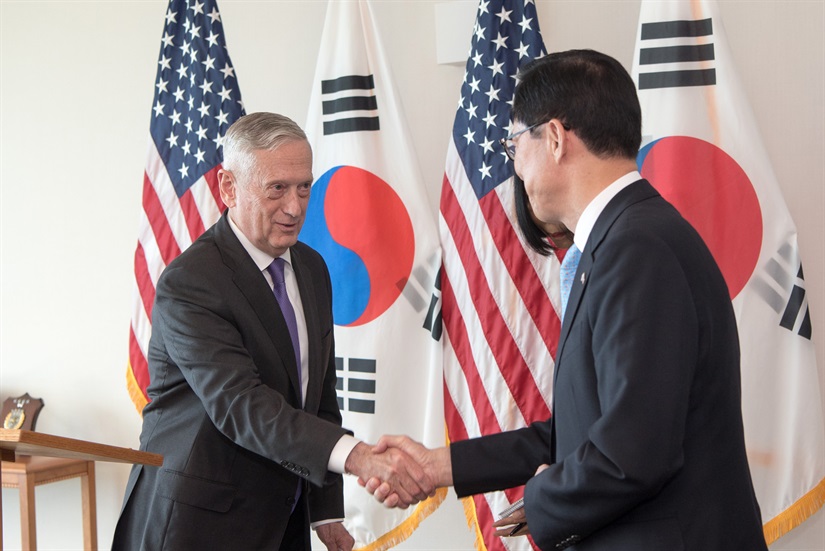 “Our response to this threat remains diplomacy led, backed up with military options available to ensure that our diplomats are understood to be speaking from a position of strength,” the secretary explained.

U.S. – SOUTH KOREA ‘IRONCLAD AND IRREPLACEABLE’ ALLIANCE
Mattis and Song reaffirmed the strength of their countries’ alliance and America’s pledge to defend South Korea and maintain peace and stability on the Korean Peninsula.

The U.S.-South Korean alliance is “ironclad and irreplaceable,” Mattis said.

“Our combined militaries stand shoulder-to-shoulder ready to defend against any attack” on South Korea or the United States, he said.

South Korea “leads by example in carrying out the United Nations’ sanctions,” Mattis said, adding North Korea is reminded that “risking its economy to boost its rockets makes it less secure, not more.”

ENDURING PACIFIC POWER
Mattis said Song is always welcome at the Pacific Command headquarters in Honolulu. This was the last stop of the secretary’s trip that also took him to Indonesia and Vietnam.

“Here in beautiful Hawaii we’re reminded that America is an enduring Pacific power — five of our states plus territories all touch on this shared ocean,” he said.

The talks for the Olympics, Mattis explained, do not address the overarching problems with North Korea.

“Diplomacy should repose reason on Kim’s reckless rhetoric and dangerous provocations,” he said.

North Korea is sending athletes, including hockey players for a unified South Korea-North Korea team, to the 2018 Winter Games in South Korea. The games begin Feb. 9.