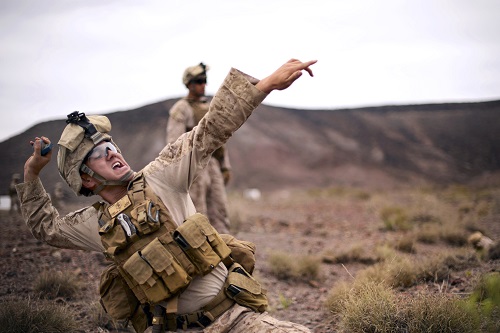 Phase two consisted of conducting live-fire training exercises to give MWSS-171 the knowledge and confidence to utilize weapon systems effectively in a deployed environment.

“This training gave the Marines and sailors the knowledge to use the weapons without hurting themselves or someone else,” said U.S Marine Corps Lance Cpl. Christopher O’Neal, an expeditionary airfield systems technician attached to MWSS-171.

Although the weapons were used in a training environment, the instructors simulated a real-world environment by replicating stressful scenarios that tested service members’ critical thinking.

“It’s important to practice in a stressful training environment,” said U.S. Marine Corps Gunnery Sgt. Ysac Perez, an infantry unit leader attached to MWSS-171. “So, if they do need to use these weapons in a combat situation, they already know how to handle them.”

Perez said the training didn’t just prepare the Marines to handle a combat situation, it also helped familiarize them with weapon systems they don’t often use.

“It’s important for them to learn, due to the fact they may be deployed in a foreign country utilizing weapon systems that they don’t get to handle on an everyday basis,” said Perez. “It’s good to practice not only handling them, but also manipulating and firing the weapon systems.”

Perez also said as a senior leader, he gained some insight into the squadron’s strengths and weaknesses to help it become a better version of itself.

“I get to know exactly our weak points within (MWSS-171), and I’ll be able to take that back and better design the next training package,” said Perez. “Next time we go to the field, I’ll know what to implement and what to increase.”