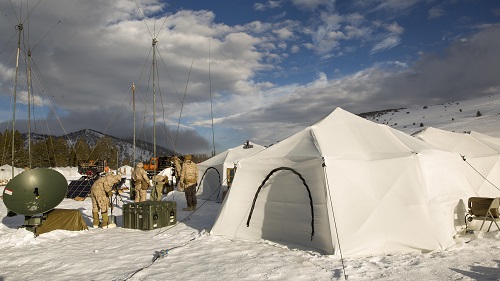 JANUARY 30, 2017, BRIDGEPORT, California – In mountain warfare, adversaries come in two forms, the enemy force and the unforgiving elements. In many respects, an alpine terrain can be the more formidable opponent, for unlike our enemies, we cannot oblige Mother Nature to relent.

Marines and sailors with 2nd Battalion, 2nd Marine Regiment, are putting their cold-weather survival skills to the test during Mountain Training Exercise 1-17 aboard the Marine Corps Mountain Warfare Training Center Bridgeport, Calif., Jan. 13 through Feb. 6, 2017. MCMWTC is one of the Marine Corps’ most secluded posts, comprised of approximately 46,000 acres of terrain with elevations ranging from 5,000 to 11,000 feet. MTX trains elements of the Marine air-ground task force across the warfighting functions for operations in mountainous, high-altitude and cold-weather environments in order to enhance a unit’s ability to shoot, move, communicate, sustain and survive in the most rugged regions of the world.

During this iteration of MTX, the inclusion of the Artic Tent, designed to house up to 15 personnel, enabled the “Warlords” to be truly immersed in the frigid landscape throughout the full duration of the training.

“For the first time, we established a tent city in Grouse Meadows on top of about 5 feet of snow,” said Maj. Mark A. Wlaschin, logistics officer, MCMWTC. “The plan was to billet up to 1,200 personnel; however, we ended up with a max of 811 people living in the city, similar to many forward staging bases around the world.”

Improving upon previously used cold-weather tents, the Artic Tents more effectively insulate heat and can be installed with heating stoves.

“[The tent city] really facilitated their learning in an administrative manner,” Wlaschin said. “Having 15-man tents connected in rows of three allowed them to organize platoon-level leadership to make sure everyone was doing the right things and that medical issues were addressed quickly.”

The snow-covered tent city served as a sprawling center of operations throughout the exercise.

“During the first phase of MTX 1-17, we see [the Marines] conducting the mobility training of the exercise where they learn flat ground techniques,” Wlaschin said. “This includes learning to ski and move on snow shoes in a flat environment before moving on to downhill techniques.”

Throughout this phase, Marines also learn to thrive in frigid temperatures that can drop as low as minus 25 degrees Fahrenheit during winter months. Mountain warfare instructors teach basic survival techniques, from heating and purifying water to how to properly utilizing cold weather gear.

For Marines, this is just one means of being prepared to complete their mission “in every clime and place.”

“They trained us in the proper gear and taught us how to survive,” said Cpl. Corey Jarvis, squad leader, 2/2. “If you can train out here and get past that mental block, than I feel like you can step up and do anything.”