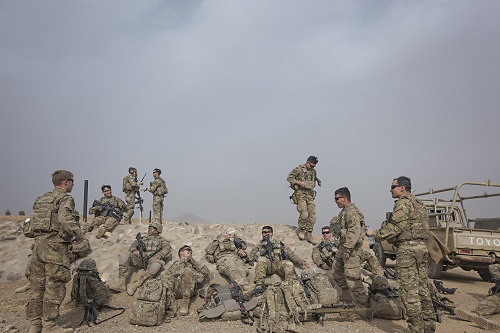 The aerial reaction force team at Bagram is often the first sent to a downed coalition aircraft to provide combat search and rescue of aircrew and secure sensitive items aboard the aircraft. The team is comprised of a single platoon on 24-hour alert to respond.

“JTACs are the masters of air-to-ground integration,” said Army 1st Lt. Thomas McDowell, the Able Platoon, 1st Squadron, 3rd Cavalry Regiment, 1st Cavalry Division platoon leader. “On these Fallen Angel incidents, a lot of assets are going to push toward the objective and it would be hard to manage. So the JTAC is going to be our main man to de-conflict fires, push assets where they need to be pushed.”

The ARF has crews responsible for extracting and evaluating casualties, assessing the aircraft to determine if it is recoverable and establishing security around the site.

“It’s a fairly complex environment,” McDowell said. “Having the JTAC there helps the other individuals focus on their mission set.”

In order to integrate the JTACs into the platoon and streamline interoperability between ground and air components during a response, they began training together, including weapons proficiency training held Nov. 21, 2016, at Forward Operating Base Dahlke, Afghanistan.

“Coming out on missions like this and training events, it gives us the opportunity to be a part of the team,” said Tech. Sgt. Jeremy Rarang, a JTAC assigned to Task Force Fighting Eagles. “It’s an honor, being able to go into battle with them and bring home downed pilots and aircrew or other soldiers that need us.”