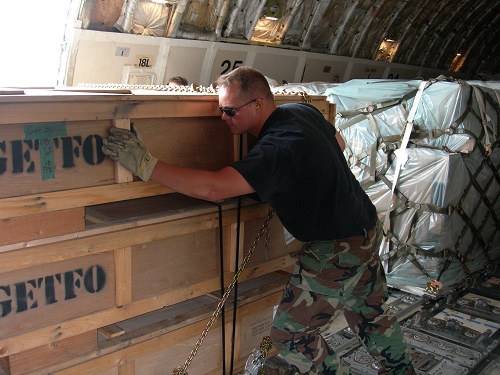 The purpose of PP16 was to demonstrate the capability of Air Force Reserve Command, Navy Reserve Air Terminal Unit, and Navy Cargo Handling Battalions to work together in a real-world aerial port takeover environment, as well as satisfy their wartime tasking requirements to the fullest extent possible in a peace time environment.

“In the event that the Navy, Air Force or both would ever need to take over an airfield in theater, we would have operational experience in doing so,” said Freight Coordinator Lt. j.g. Geoffrey Rienstra. “Also, it builds camaraderie and communication experience in joint efforts.”

During the two-week exercise, reserve Sailors and Airmen took over the day-to-day running of the terminal from the civilian employees. The members built more than 100 Air Force 463L pallets, processed approximately 3,000 passengers, and moved more than 550 tons of cargo using 85 aircraft.

“It’s like facilitated sink or swim,” said Airman Jessica Boisseau of the 73 Aerial Port Squadron out of Fort Worth, Texas. “If we’re floundering and on the verge of drowning, we have people to turn to who know what they’re doing, so we don’t compromise the mission, but have no choice but step in and actually learn what we’re doing.”

PP16 was the latest installment in an exercise that’s been going on for more than a decade. This year’s exercise presented a brand new challenge for participants.

“The Chambers Field runway was shut down during Patriot Partner due to maintenance,” said Air Force Lt. Col. Gloria Field, the officer in charge of the exercise. “All passengers were still processed through the Norfolk Air Terminal but were then transported, along with any cargo, to Langley AFB (Air Force Base) for follow-on flights. We split our operations and personnel between three shifts here at Norfolk and at Langley and never missed a beat.”

According to Cmdr. Ronald Kish, officer in charge of the air terminal and director of Transportation, the mission objectives of Patriot Partner 2016 are to determine and increase the overall operational proficiency of the combined Navy and Air Force team by participating in hands-on training at a fully functional aerial port environment.

“Our facility provides the ideal construct and resources for these units to experience all elements of air terminal operations,” said Kish.