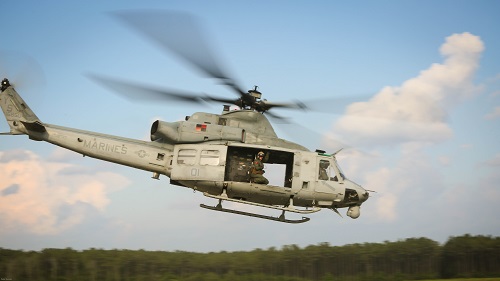 Staff Sgt. Stephen Ferguson, a crew chief with the unit, explained that when new pilots conduct familiarization flights to acclimatize to navigating the UH-1Y Venom in a new environment. The UH-1Y is a helicopter capable of carrying multiple weapon systems, to include various mounted machineguns and rocket pods as well as a small squad of Marines.

They flew to several training landing zones off base, which allowed unit’s new pilot to get hands-on experience and training with his new unit.

First, the pilot was coached through each landing zone and participated in a demonstration of what he was expected to do. Then, he performed the maneuvers.

“It’s important to control your entry into a landing zone when conducting these tactical approaches because in many environments there is the threat of hitting a tree or other obstacle,” said Casey. “Staying vigilant while flying low and following the terrain helps mitigate that threat.”

The crew concluded with some emergency drills that simulated losing power in their engines.

“This simulation involved flying the aircraft at high velocity to gain momentum,” said Ferguson. “Then they had to navigate it in a way that angled the helicopter as it neared the ground and slowed it down enough to attempt a safe landing.”

This technique is difficult to perform because the pilots can’t cut power to the aircraft to try and replicate the same conditions as an emergency.
Casey explained losing power in both engines does not stop the helicopter’s blades from spinning naturally and rotations actually increase in speed as the aircraft descends.

“It is at this time that the pilot manipulates the helicopters blades in a way that allows them to angle the aircraft for a safer landing,” Casey said.

Casey explained that in the event of engine failure, they need to be able to think and react quickly to land the craft in the safest possible way, with minimal risk for the crew and any passengers.

For every flight, there are countless hours that go into planning for safety. This includes briefing the crew, making sure everyone knows how to use their safety gear in the event of an emergency-landing in the water and other in-flight emergency procedures.