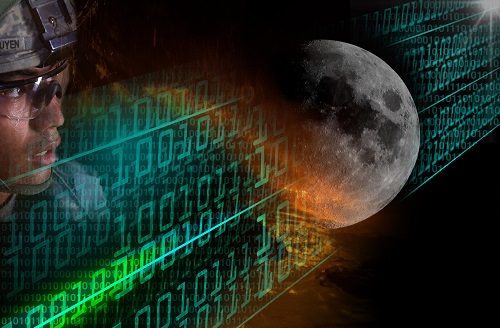 NOVEMBER 11, 2016, ARLINGTON, Va. (Army News Service) – Cyber professionals are often capable of doing much, much more than what the law allows. In their private-sector jobs, they’ve got to be on the right side of the law if they don’t want to end up in a prison cell.

But those same skilled cyber professionals may be able to cut loose if they were in the Army. In fact, that potential for greater freedom in cyberspace might entice some of those professionals to don a uniform and practice their craft safely inside the Army tent in the Army’s cyber branch.

It may also serve as an enticement for cyber professionals who are already serving in the Army to stay in the Army, the Army’s vice chief of staff said.

“The good news is, for our cyber professionals, they can do things in defense of our nation that they would get arrested for in the outside world,” said Vice Chief of Staff of the Army Gen. Daniel B. Allyn Thursday, while speaking at a cyber forum at the Association of the U.S. Army headquarters.

“That’s very attractive to those who are very, very skilled and committed to the security of our country. And for that, we are thankful for both their skill and, just as importantly, for their desire to continue to serve and protect our country.”

The Army has its own cyber branch now, career field 17, for cyber professionals, and a schoolhouse as well at Fort Gordon, Georgia. Right now the branch has 397 officers, 141 warrant officers and 560 enlisted Soldiers in its ranks, Allyn said.

“Army is on track fielding our cyber mission force, from 41 teams today, to eventually a full fill of 62 total force teams,” Allyn said.

The Army’s Cyber School stood up in 2014. This year, 21 officers graduated. The Army is on track to beat that number next year, Allyn said.

In March 2017, enlisted Soldiers will for the first time attend Army Advanced Individual Training for cyber. Also in March, Army-developed AIT to defend the network will begin at Fort Gordon, Georgia. Allyn said he expects an initial 300 Soldiers to graduate from that course.

Attracting and retaining cyber talent remains a concern for the Army, Allyn said. It’s not just Army networks that need to be protected — commercial networks require protection as well — and the Army must compete with the private sector to attract the best cyber talent.

One way to make Army cyber more attractive, Allyn said, is through lateral accessions, a strategy used in other career fields in the Army to compete with the private sector, like medical — where officers can be brought in at a higher rank and higher pay.

“The ability to laterally access skilled professionals is something we do already in the Army in some of our skills,” Allyn said. “But we have recognized that this has applicability in specialty fields like cyber. And that is being matured and developed as an option for the chief and the secretary.”

Allyn said the possibility of lateral accessions for cyber was considered as part of the Army’s “Force of the Future” analysis conducted last year.

“Not only will we have to apply new accessions tools, but we are going to have to consider, ‘How do you retain this incredible talent?'” he said.