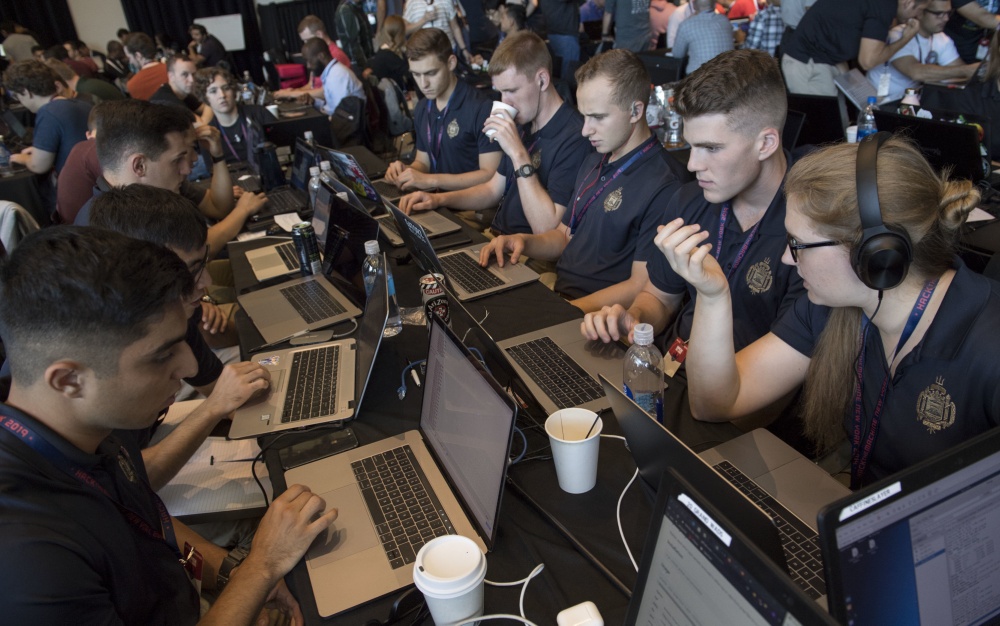 SEPTEMBER 13, 2019 – Normally “hacking” has a negative connotation in the cyber world. However, over the weekend of Sept. 6-8 in Brooklyn, New York, people came together to purposefully hack into a Navy system, and it was a good thing.

The Navy-hosted “Hack the Machine 2019” brought more than 600 people from government, industry and academia to the fifth iteration of the challenge to help the Navy solve complex problems. This year’s event was in the New Lab at the Brooklyn Navy Yard.

“We have very talented engineers and scientists in the Warfare Centers, and when they attend events such as Hack the Machine, they’re not only taking their knowledge to share, but they’re also bringing what they learn back to the division,” said Larry Tarasek, technical director for NSWC Carderock. “The cyber world is evolving so quickly, and we have to keep up.”

During a team-building exercise at the Intrepid Sea, Air and Space Museum on Friday night, people formed teams of about eight to take on one of three tracks. In the first track, called “Hack the Ship,” participants attempted to hack cyber physical systems of maritime vessels.

The second, called “Data Science: Cleared for Takeoff,” challenged participants to use data science and machine learning to predict maintenance problems before they occur on the Navy’s F/A-18 fighter jets.

For track three, “Digital Manufacturing: Rendering Aid,” teams worked to design parts that could be remotely printed at sea to repair ships.

The winning team from track one, the “Hack the Ship” cyber challenge, was “Cactus Balloon Scream,” which included members from NUWC Newport, NSWC Philadelphia and outside government. Their challenge was hacking into maritime systems using either hardware or software.

Jesse Carter from NUWC Newport’s Undersea Warfare Electromagnetic Systems Department said he was more comfortable working the software piece while his colleagues from NSWC Philadelphia worked on the hardware.

“It was nice to work with Philly, with their background in physical components,” Carter said, adding that he had worked with NSWC Philadelphia before at previous Hack the Machines, and they collaborated ahead of time to prepare for the New York event.

There was an educational version of track one and the winning team “Ahh Ship” included participants from NUWC Keyport, NSWC Port Hueneme, NUWC Newport and NSWC Panama City.

NUWC Newport had several people on the track two winning team “Jumbos.” For this “Data Science: Cleared for Takeoff” challenge, the team had to identify which aircraft had wiring problems. Using several different data analysis tools, like Tableau, Anaconda, Python and MATLAB, the team was able to analyze millions of actual maintenance records for the F/A-18 and find the defective airframes. There were 13 known problem aircraft, and the Jumbos found them all, as well as a 14th problem not known to even the event organizers. The team did this all during the two-day event.

“Getting up close to real Navy problems and collaborating on solutions in such a short time period really helped us fine tune our problem statement, solution approaches and presentation style,” said Colby Wilkinson, a member of the Jumbos and a research scientist in NUWC Newport’s Undersea Warfare Combat Systems Department. “The condensed timeline got us over ‘analysis paralysis’ and the pressure made us more productive.”

In a congratulatory note to the NUWC Newport employees that went to Hack the Machine 2019, Technical Director Ronald Vien said these events are a great opportunity for the organization to team with government, industry and academic partners.

“I look forward to having our folks compete in future Hack the Machines and similar events that focus on skills that are critical to our Navy’s digital transformation,” Vien said.

NSWC Crane employees made up the entirety of track two’s third place team Databaes. John Vorwald from NSWC Carderock’s Sea-Based Aviation Branch was part of track two. Though his team did not win, he said he was very happy with the team and thought the people were focused on the goal and had a wide background of experience. He said he wanted to help his team members contribute on a fast schedule and wanted to learn different points of view about solving a challenging data-science problem.

“It was a humbling experience to face a problem that appears beyond our current capabilities,” Vorwald said, adding that organizers emphasized the need to both envision future technology applications, and then apply actions to those visions.

Two NSWC Carderock employees, Frankie DiSanto and Stephanie Blease, were part of the winning team from track three. DiSanto works in NSWC Carderock’s Non-Metallic Materials Research and Engineering Branch and Blease is a brand-new employee at NSWC Carderock who works in the Dynamic Measurements and Testing Branch. DiSanto said she went in not knowing exactly what to expect.

“I expect to fail a lot, learn a lot and dream up fresh new ideas,” DiSanto said before heading to New York. “I sat through a high-velocity learning talk this year, and the author talked about the importance of failing quickly and learning quickly. I definitely think this is a good opportunity to put that in motion.”

DiSanto said the name of their team was “KISS,” which stands for “keep it simple, stupid.” She claimed that was why they won, not because of the name itself, but because that’s what they did.

The second place winners for track three, the “Mad Adders,” had employees from NSWC Port Hueneme, and NSWC Crane had one person on the second-place team.

NSWC Corona Division sent three teams to the event, one for cyber (track one) and one for data science (track two). Their technical director, Dianne Costlow, said the people that went have a clear passion to become better data scientists and analysts, and Hack the Machine was a good investment in workforce development, as well as being a way to gain feedback on development efforts to date.

Costlow said in the area of workforce development within the Warfare Centers, data science and analytics is something that everyone is working with already, and they are building those capabilities across the Navy.

“When we develop our own folks, who already know Navy systems, they know Navy language, they know the processes, they know the culture, they already understand the historical ways of using data, and now they are learning new techniques,” Costlow said. “Those are the really powerful people, and they are the ones that already have the passion for the Navy, and they want to stay with the Navy.”