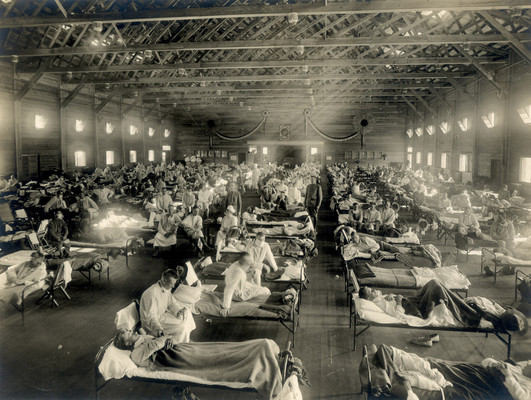 MARCH 21, 2020 – While the National Guard is often called out by governors to respond to natural and man-made disasters, Guard members also have a long history of responding to public health emergencies.

Since the Guard’s establishment in 1636, members have responded to outbreaks of smallpox, Spanish flu, yellow fever, cholera, hoof-and-mouth disease and typhus, said Dr. Richard Clark, a historian with the National Guard Bureau.

One of the earliest Guard responses to a public health crisis was in 1792 when members of the Massachusetts National Guard helped inoculate people from smallpox, said Clark. A year later, the Maryland National Guard was called upon to implement quarantine measures in response to a yellow fever outbreak. Guard members in Tennessee, Florida and Louisiana also responded to yellow fever outbreaks throughout the mid-1800s.

In 1910, the Michigan National Guard supported similar quarantine efforts led by local officials in response to smallpox. Guard members in Georgia responded similarly to an outbreak of the disease in 1800.

“Prior to approximately 1920, the National Guard and the organized militia often generally supported [local officials] by enforcing quarantines and providing security,” said Clark.

The 1918 outbreak of the Spanish flu, which affected about one-third of the world’s population, also led to a change in public health response measures.

“Advances in public health, technology and medicine meant that the epidemics and plagues of the past became fewer and far between,” said Clark. “As we better understood the causes of disease, and how diseases are transferred, American public health professionals became proactive more than reactive.”

The National Guard also adjusted to respond with those changing approaches, said Clark.

In 1924, the governors of California and Arizona called out the Guard to help contain hoof-and-mouth disease. The Arizona Guard stopped all who arrived in the state by highway, said Clark. Before travelers could continue, they were required to bathe and their clothing and contents of their automobiles were fumigated by Guard members.

Florida National Guard members followed similar protocols in 1930 when they supported local authorities in establishing lines of defense against the Mediterranean fruit fly. Guard members were positioned in 42 towns in the state to inspect train riders and their baggage. Those on baggage inspection checked more than 9.6 million pieces of luggage, said Clark, and found 19,863 hosts of the infectious flies.

When Hurricane Diane struck the east coast and New England in August 1955, the Connecticut National Guard responded to the immense flooding, and also worked with local health officials to administer thousands of typhus immunizations to flood victims to prevent the disease, said Clark.

“Since the 1920s, the National Guard has been most effective in public health emergencies in supporting first responders and local communities when no one else could help,” said Clark.

That’s similar to when the Guard is mobilized as part of overseas operations.

“Just as the National Guard augments active [component] forces in wartime and contingency operations, Guard [members] provide the same support to emergency services in the local community,” said Clark, adding that the support Guard members provide to local authorities during pandemic responses has continued to evolve.

As of Wednesday morning, approximately 2000 Guard members in 23 states are on duty supporting civil authorities in response to COVID-19, the coronavirus. Rather than enforcing quarantines or stopping travelers, those on duty have been disinfecting public spaces, distributing food, assisting with transportation and logistical support of health officials and coordinating with state and local health and emergency managers.

Guard members currently on duty are serving under state active duty – a status sourced and paid for by the state – with Guard members remaining under the control of their governor.