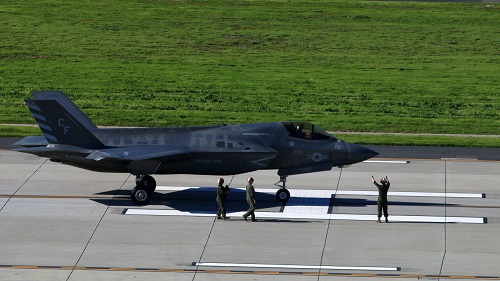 Service members conducted the exercise to showcase the abilities of the F-35B Lightning II, a fifth-generation fighter jet, as well as integrate the new aircraft with older fourth-generation aircraft and Naval assets. The primary benefit of this aircraft is the ability to conduct short take-off vertical landing (STOVL) operations in a complex and robust training environment.

“It’s been really good to see all the different capabilities of the different fighters,” said Air Force Maj. Kenneth Sutherland, an exchange officer with Marine Air Control Squadron (MACS) 1. “Everyone involved in the exercise brings different abilities to the table.”

“We want to see how we can best employ different sets of fighters together, to best complete a mission,” said Sutherland.

The training included ground refueling with MV-22B Ospreys and F-35s, aerial refueling with F-35s, Ospreys and F/A-18 Hornets, hot reloads of F-35s centered around loading ordnance onto a jet while it is still running, offensive air support and anti-air warfare.

According to Maj. Corey Callison, the operations officer for Marine Aircraft Group (MAG) 13, several MAGs were involved in the execution of the exercise, but MAG 13 took the lead in developing the training objectives for exercise Agile Lightning.

This exercise gave 3rd MAW squadrons the chance to integrate with Naval assets including the USS Bunker Hill and Navy Strike Squadron (VFA) 97.

“Training with the Navy is beneficial to Marines because we work so closely with them we when go on a marine expeditionary unit (MEU),” said 2nd Lt. Brian Easley, the senior air director at Marine Air Control Group (MACG) 38. “It gives us a familiarity with their capabilities and command structure and allows us to better integrate in the future.”

The exercise also provides F-35 training opportunities to support assets, such as MACG-38 and MACS-1.

“Being able to practice our skills live allows our junior Marines, as well as our officers, to further advance in their MOS and ultimately their careers,” said Capt. Marco Arriaga, the MACG-38 detachment officer in charge.

MACG- 38 operated out of a Tactical Air Operations Center at Marine Corps Base Camp Pendleton, California, to ensure accurate tracking and controlling of aircraft during the exercise.

“We’ve succeeded in integration,” said Sutherland. “Looking at previous executions of Agile Lightning, you wouldn’t be able to tell this is the first time the F-35s have participated in this exercise.”

During the training, the F-35 advanced tactics, techniques and procedures by demonstrating the ability to conduct distributed STOVAL operations in an air-to-air defensive environment, simulating air-to-air warfare, offensive air strikes and integrated with Naval forces, taking a step further to become a part of the operational forces.

“With the increased importance in Marine Corps aviation, it gives us an opportunity to work with the F-35 for the first time,” said Easley. “We better understand how to employ and provide control for that aircraft so they have the ability to integrate into a Marine Air-Ground Task Force.” 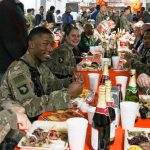