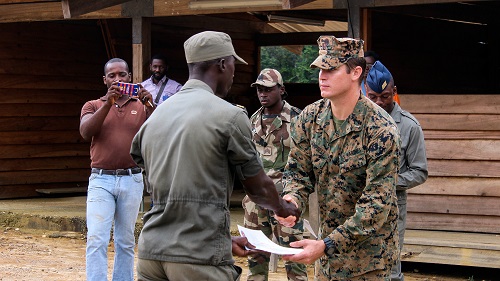 “The Gabonese are working to cut down on poaching being conducted in the national parks, as well as trafficking of illicit goods and narcotics,” said 1st Lt. Conor Campbell, a theater security cooperation team leader.

By conducting training together, both nations’ increase their ability to work together and prevent illegal activities in the region. By learning from each other and developing individual skills, the training will have an immediate effect in ongoing operations.

“The majority of the missions will be held in Minkebe, helping the park rangers,” said Lt. Germain Oleri Owane, a Gabonese Light Aviation solider. “We can also apply these techniques to other areas of the military. We get better every time the Marines come to Gabon.”

Previous iterations in Gabon have conducted similar training; however, this iteration specifically focused on developing a strong core of instructors, able to pass training techniques to other Gabonese soldiers.

“This training team is slightly larger, with a focus on developing a cadre of trainers for the Gabonese military,” said Campbell. “The junior Gabonese soldiers were given an opportunity to instruct while under the supervision of US Marine, who acted as a knowledge backstop, and to answer any questions.”

Training together strengthens the bond developed during the long-standing partnership between the two nations.

“It helps build interpersonal relationships between members of the military, which is huge,” said Owane. “It is good to share our culture with each other. I think it helps build a better relationship between Gabon and the US.”