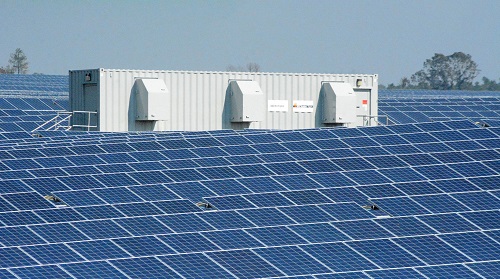 NOVEMBER 18, 2016, WASHINGTON, By C. Todd Lopez – Army officials on Wednesday cut the ribbon on a 270-acre, 30-megawatt solar power array at Fort Gordon, Georgia. It’s the second of three such facilities planned in the Peach State as part of an effort dubbed “3×30.”

Power from the new solar array doesn’t yet provide direct power to Fort Gordon, though that’s a goal to be met in later phases of the project, said Michael F. McGhee, executive director of the Army’s Office of Energy Initiatives. Instead, the 137k-panel array, which produces enough power to run 4,300 homes, pushes electricity into the civilian power grid on which Fort Gordon relies.

The new solar array sits inside the protected gates of Fort Gordon on government-owned land that was made available to Georgia Power as part of a 35-year easement. Georgia Power owns the array, operates it, and maintains it. Fort Gordon and the Army benefit from the project because it indirectly enhances energy security for the installation — which is a goal the Army is aiming to reach across the force.

With the completion of Phase I of the project there, McGhee said, Fort Gordon stands to benefit from several enhancements to the civilian power grid, among them “distributed generation.”

“Rather than [generating power] in one large centralized capability, it adds improved resiliency to the grid,” McGhee said. “That way if something goes down over here, not necessarily everything goes down everywhere else.”

Because the solar array also sits inside the Fort Gordon perimeter, the generation source is as close as possible.

“There’s less opportunity for disruption of the power from that source,” McGhee said. “Meaning that the local grid that serves us has a better chance of surviving some sort of outage that may be caused by an accident 200 miles away.”

Also, he said, the solar array is well protected at Fort Gordon, where it sits safely behind the Army’s physical security perimeter.

Across the U.S. government, there is a growing appreciation that certain vulnerabilities exist right now within in the power system, according to McGhee.

“There are determined attackers who would try to take advantage of our power system and do it harm, which could do the nation harm,” McGhee said. He cited weather events and hackers as potential threats to secure electricity.

“As we become increasingly interconnected, our power system is no different,” he said. “It’s increasingly relying on the connectivity, and that presents a potential cyber vulnerability.”

Across the force, the Army is looking for ways to mitigate power supply vulnerabilities and increase the resiliency of its installations. For now, Fort Gordon will benefit just indirectly from the solar array. But McGhee said, the goal for the future will be to provide more direct advantages.

Those will include the ability to store power generated by the array in battery storage, and the ability to distribute that energy directly to the installation with micro-grid technology in the event of a civilian power grid failure.

According to McGhee, the Army’s deal with Georgia Power ensures that solar array will be equipped to be connected, at a later date, to a micro-grid that can distribute power directly to Fort Gordon.

Another Army energy security project is underway at Schofield Barracks, Hawaii. That project is not a solar energy project, but instead a biofuel project, which will be completed sometime in 2018. There, McGhee said, Hawaiian Electric is constructing a power plant on Army land that will provide power to Schofield Barracks, Wheeler Army Airfield, and Kunia Field Station — as well as to parts of the civilian community — in the event of a civilian grid failure.

In June, the Army also opened a 67-acre, 15-megawatt solar facility on Fort Detrick, Maryland. That facility provides about 12 percent of the power used by the installation.