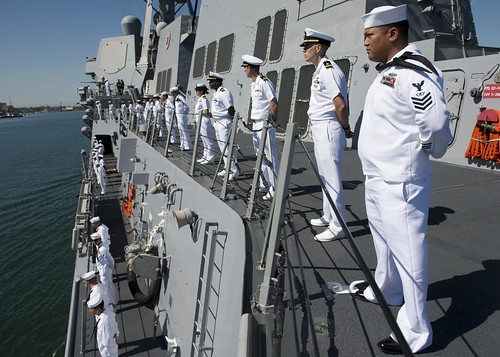 JANUARY 15, 2021 – Chief of Naval Personnel has re-dedicated the nearly 20,000 MyNavy HR personnel to the task of making sure the fleet has enough sailors to meet its missions, stating that his first strategic goal in 2021 is to “Build a Navy that Can Fight and Win.”

As the Navy moves into 2021, more Sailors are serving at sea today than at any time in the past seven years, Vice Adm. John B. Nowell, Jr., the Navy’s chief of personnel, told an online audience at the 33rd annual Surface Navy Association symposium on Jan. 13.

A career SWO, Nowell is no stranger to the association, whose annual gathering brings together the Navy and industry experts to tackle the most challenging topics facing the Navy’s surface community.

And this year, he re-dedicated nearly 20,000 MyNavy HR personnel to the task of making sure the fleet has enough sailors to meet its missions, stating that his first strategic goal in 2021 is to “Build a Navy that Can Fight and Win.”

Nowell also detailed the progress made — and the work yet to do — in transforming accessions training for both enlisted and officers, with an eye on delivering a more qualified and mentally tough Sailor upon arrival in the fleet, something he said improves individual readiness.

Also, Nowell is actively encouraging everyone in the fleet to get the COVID-19 vaccine when it is available to them. He says it is a readiness issue that everyone needs to opt into to keep the fleet ready and protect themselves, their shipmates and their families.

“To be clear, Fleet Manning remains my number one imperative,” Nowell said. “Now is the time to remain vigilant, defend freedom, patrol the seas and project power — that is what surface warriors do.”

To support that, he noted that right now, the Navy has more sailors serving in Operational Sea Duty units anytime since 2014.

Simultaneous growth in billets and the closing of existing gaps, he said, will both “continue to trend higher into FY-21 and beyond,”

Most in the fleet have heard about the numbers of gapped billets on sea duty, but what many don’t know is many gaps at sea right now are there because the Navy has upped its sea-duty manning levels.

These increases, he said, came after a 2017 surface fleet workforce review, which resulted in the Navy upping the shipboard manpower requirements and the funding needed to add those billets.

Those sailors, he said, will be onboard 12-months before deployment.

“You need to understand that some of these gaps are due to increased billet growth in the Fleet,” Nowell said. “This increased manning directly contributes to Fleet Readiness and we are working hard to increase this number.”

These increases, he said, were “achieved through a combination of increasing the authorized end strength, resource sponsors buying more manpower for their platforms, and multiple Sailor-focused process improvements, incentives and policy mechanisms that expanded career progression and retention opportunities for our Sailors.”

Key to this effort was the most Sailor-facing part of the process, the change from the Career Management System/Interactive Detailing to the fielding of the MyNavy Assignment platform, which started in 2019. He said this “has added transparency, functionality and a much more user-friendly interface for Sailors” in their detailing window.

Already, he said, the Navy is developing new policies, as well as monetary and non-monetary incentives to get sailors to take and stay in sea-duty billets, such as the Advance to Position initiative that “incentivizes Sailors to take orders for priority, or hard to feel billets across the fleet, by linking service in the position to [permanent] advancements to the next pay grade,” Nowell said.

This program, he said, is primarily designed to address at sea billets. It has also been used recently to fill critical shore billets such as Recruit Division Commander billets at Recruit Training Command and hard to fill overseas duty.

“For the sea shore flow, we’ve begun working on a replacement to this with a personnel policy that will leverage our detailing marketplace and take advantage of other transformation initiatives like Ready Relevant Learning, our Rating Commonality Matrix and Advanced to Position to more effectively and efficiently manage a fleet,” he said.

Fleet Readiness is already getting a boost from training changes, Nowell said, an effort that is gaining steam not only at boot camp, but also in the Navy’s schoolhouses.

At Boot Camp, he said, the Navy is pressing hard to increase the readiness level of sailors coming out of training.

“We’re working hard with Navy leadership to build a Level One Firefighting and Damage Control wet trainer at RTC Great Lakes to certify every sailor entering the fleet,” Nowell said. “This will give time back to the fleet by sending Level One qualified sailors to ships and submarines, enabling commands to focus on getting firefighting and damage control quotas for those whose certifications are expiring.”

Another effort he says that is already paying dividends in the fleet are the efforts to teach “Warrior Toughness.” By promoting resilience and toughness in recruits and officers in the accessions pipeline, they create sailors who can not only survive but thrive in adversity.

“While complementary, these attributes are not the same,” he said. “Resiliency is the capacity to recover quickly from difficulties, while toughness is the ability to deal with hardship or to cope in different situations.”

Currently, about 11 hours of training are given on the subject. He said that practicing what is learned is encouraged throughout training and beyond in the fleet.

“It’s a holistic approach that emphasizes spiritual, mental and physical strength to prepare Sailors to manage stress and execute the mission,” Nowell said.

The idea is to develop a “warrior mindset,” using mental and spiritual preparation and performance psychology techniques to improve individual physical and cognitive performance.

“The SEALs have been doing it for years, we’ve now brought it on board and it’s paying dividends,” Nowell said. “The goal is that when called upon, sailors will be prepared to act and perform at the needed level.”

Nowell also outlined the progress of the Navy’s “Ready, Relevant Learning” efforts — which is the way forward for most of the Navy’s enlisted career fields.

Nowell said this effort began a few years ago, identifying the training needed throughout a career for a Sailor who starts at the apprentice level to move through journeyman to a master level by receiving training “blocks” when they are ready.

Already, 47 ratings have developed their block learning curriculum at the apprentice level and each year, more are moving into the delivery of this new content for new Sailors on their way to the fleet.

“Moving beyond apprentice-level training, we’ve started requirements development efforts for the journeyman and master level learning continuums for five ratings and expect to start another ten ratings this year,” Nowell said. “This consists of leadership and professional training that builds upon the technical aspects gained as an apprentice.”

As the Navy’s chief of personnel, Nowell has seen first-hand the impact COVID-19 has had on the Navy’s readiness and spent time during his talk to encourage everyone in the service to opt into getting the COVID-19 vaccine.

“The only way to end this pandemic sooner is to get vaccinated when it’s your turn,” Nowell said.

Vaccination, he said, is the best way to mitigate the risk of the virus to individual Sailors, but it’s more than that.

“You are also contributing to mitigating the risk to mission by increasing the numbers of those vaccinated at your command,” he said. “The Navy will continue to monitor this roll-out and keep you posted — but just like CNO and MCPON did, it is vital that we all roll up our sleeves to end this pandemic.”

The vaccine is just the first part of the plan to beat COVID in 2021. Nowell said it can’t succeed without “continuing to do the low-tech steps needed to protect yourself, your family and each other, like wearing a mask, implementing physical distancing and washing your hands often — we know what works and we have to stay disciplined in doing it.”