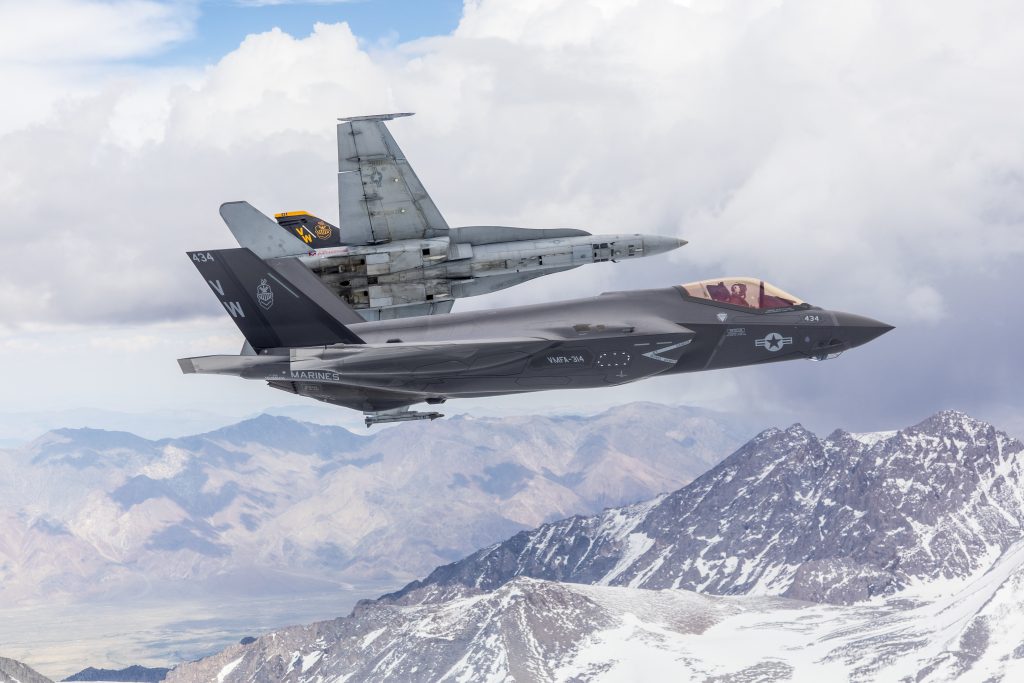 SFFOC is an important milestone for VMFA-314’s transition to the F-35C Lightning II from the F/A-18 Hornet. It marks the end of the squadron’s oversight by VFA 125, which was responsible for ensuring that the “Black Knights” received quality training during their temporary relocation to Naval Air Station Lemoore, California, from Sept. 2019 to Jan. 2020.

The SFFOC process ensures the squadron is manned with qualified personnel to implement maintenance and safety programs in support of fleet operations. All transitioning squadrons are required to complete this certification prior to independently conducting flight operations.

“The achievement of this certification represents years of hard work and detailed coordination across the entire USMC and Naval Aviation Enterprise.”
Lt. Col. Cedar Hinton, Commanding Officer of VMFA-314
“The ‘Black Knights’ have met or exceeded every challenge faced during this transition, and I am extremely proud to be a part of this fantastic squadron,” said Lt. Col. Cedar Hinton, Commanding Officer of VMFA-314. “Today’s achievement marks a significant milestone and the beginning of a new chapter in our storied legacy. The F-35C advances our capability well into the next generation of fighter-attack aircraft and will keep our squadron, and our service, relevant for decades to come.”

The certification process encompasses areas such as equipment, personnel and programs. Requirements include the installation and operation of management information systems and their accompanying support networks. There is also a requirement for operational F-35C squadrons to maintain robust maintenance programs and complete various inspections ranging from conventional weapons technical proficiencies to safety. Squadron personnel complete a transition curriculum and maintain specific competencies in accordance with Naval Air Training and Operating Procedures and Standardization guidelines.

“I am honored to serve alongside the Marines who make this squadron’s operations run smoothly every day,” said Sgt. Maj. Lorenzo Williams Jr., sergeant major of VMFA-314. “The Marines who transitioned to VMFA-314 from various units across the Marine Corps were the right men and women for the job. They are disciplined, intelligent and they completely understand the importance of their mission. We have mature staff non-commissioned officers who have a great deal of experience, which made the transition happen seamlessly. I know they will carry on our proud legacy from being the first F/A-18 squadron in the Department of Defense to fly the Hornet tactically to becoming the first operational F-35C squadron in the Marine Corps.”

The “C” variant of the F-35 is the first 5th Generation long-range stealth strike fighter designed to operate from both land bases and aircraft carriers. The Lightning II’s control surfaces and landing gear are better equipped for carrier operation than the “A” and “B” variants of the aircraft flown by the U.S. Air Force and Marine Corps, respectively. The F-35C is also equipped with larger internal fuel storage, which when combined with its ability to refuel in-flight, extends its range and allows for enhanced flight time when compared to other aircraft.

3rd MAW continues to “Fix, Fly, and Fight” as the Marine Corps’ largest aircraft wing and remains combat-ready, deployable on short notice, and lethal when called into action.