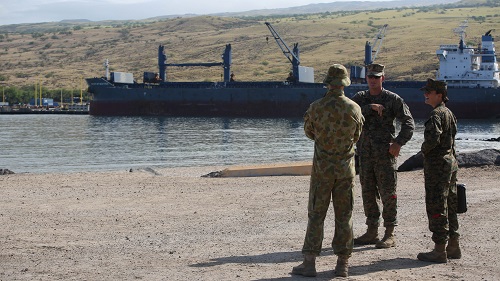 Fortunately, Marines like Sgt. Max. T. Humphreys are there to provide supervision that helps arrange an array of gear and equipment into a sophisticated combat machine.

Max T. Humphreys, native of Pueblo, Colorado, a town nicknamed Home of Heroes because of its long standing military ties, provides the Marines in his charge with the tools they need in order to make large moves like this come together.

“I facilitate the movement of personnel and packs from any location to another,” said Humphreys, a landing support specialist with Transportation Support Company, Combat Logistics Battalion 3, which supports III Marine Expeditionary Force. “If something is going from one place to another, I usually have something to do with it.”

Particularly during large-scale exercises like RIMPAC 16, when so much gear needs to be moved and accounted for, commanders typically place this responsibility on the shoulders of a staff noncommissioned officer or officer.

“Here we have a lot of gear and packs coming through, and two of our priorities are accountability and safety,” said Lt. Col. Patrick Pluas, a New York native and the commanding officer of CLB-3. “This is the job for a staff NCO typically, but Humphreys is in charge of making sure everything happens in an organized manner, especially with the Australian military here. It’s a lot of responsibility for a sergeant, but he’s doing it and he’s doing a good job.”

According to Humphreys, a job this large would usually require about 15 to 20 Marines. But with only six Marines in his charge, he is still required to perform to the same standard — not only when it comes to offloading ships, but also aircraft that come to the island.

“Without having these hard-working Marines that I can rely on, my job would be a lot harder,” said Humphreys. “Without them busting their humps for me, I probably wouldn’t be as successful as I am here.”

According to Lance Cpl. Francisco Sanchez, a landing support specialist with CLB-3, Humphreys’ close knit-relationship with his Marines makes working short-staffed easier and even enjoyable.

“Working with so few people is a little harder,” said Sanchez, a native of Centerville, Tennessee, “but [Humphreys] makes it easier. I believe all the junior Marines, including myself, look up to him.”