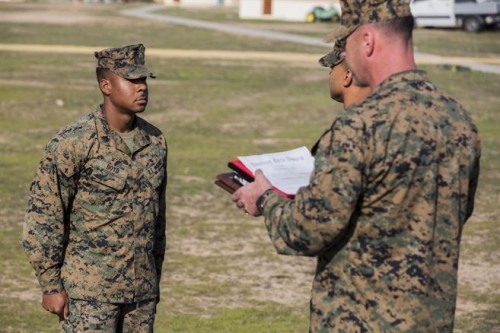 MORON AIR BASE, Spain, January 26, 2016 – Eight months ago, Marine Corps Sgt. Raheem Boyd was in his room on Camp Lejeune, North Carolina, when he received a message from a fellow Marine telling him he had discovered suicidal posts on another Lejeune-based Marine’s Facebook page.

“I checked that Marine’s page and saw one post that looked strange and made me want to investigate further,” Boyd said, adding that he recognized the Marine from a previous tour in Okinawa, Japan.

When he drove to the barracks, he found that the Marines on duty were by the Marine’s room, which was empty. After searching the area, one of the on-duty Marines briefly caught a glimpse of the troubled Marine in his car with an assault rifle as he sped off from the barracks parking lot.

Boyd said he followed and eventually saw his car sitting on the side of the road. “He did not recognize me at first,” Boyd said. “It was the first time I had seen him since Okinawa.”

Boyd said he approached the vehicle and attempted to calm the Marine, telling him that he was there for him and that there is always another way. As they talked, the first police car pulled up and the Marine started to panic.

As more police cars approached with flashing bright red and blue lights dissipating in the darkness, the Marine reached across the seat for the rifle — with the intent to shoot himself, Boyd said. Boyd quickly reached through the window of the car, wrapped his body around the Marine and pushed the rifle away to the floorboard.

“I gave just enough time for [the police] to come around and secure the weapon,” Boyd said. “After the situation de-escalated, I did my best to comfort the Marine and tell him that everything will be all right. He got out of the car and we escorted him to the hospital in an ambulance.”

‘Me Being a Human’

“A lot of Marines were telling me I did a good job and that they wish a lot more Marines would be like me,” said Boyd, a Birmingham, Alabama, native. “But I feel that wasn’t me being a Marine, it was me being a human — being there for someone who needs help. I always fell back on my morals — to always treat others how you would want them to treat you.”

Boyd’s excellence in service did not stop there. During his deployment here, he was meritoriously promoted to sergeant, helped certify more than 40 new black belt recipients, led the unit’s leadership seminars for corporals and — his latest achievement — receiving the American Hero Award for preventing a tragic loss of life.

“Sergeant Boyd is above his peers and is very mature. The Marines in his shop always look up to him,” said Marine Corps Gunnery Sgt. Archie Mardis Jr., utilities chief for the Combat Logistics Detachment here. “I never have to worry about him. He is the Marine to go to.”

Each tragic loss to suicide has far-reaching impact on families, friends and Marines left behind. The Marine Corps had 28 suicides in the first three quarters of 2015. If not for Boyd’s actions, that number could be 29.