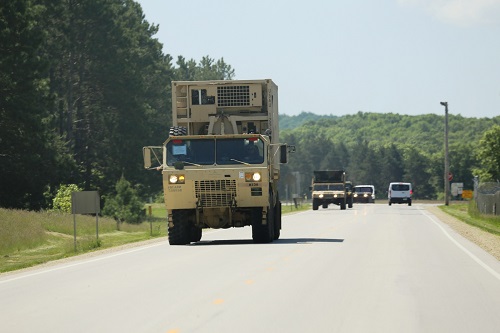 ome station or a regional training center, such as Fort McCoy, according to the National Guard Bureau.

The exercise also minimizes cost and time away from home and jobs for Guard personnel. It is designed to provide a world-class training event to achieve platoon-level proficiency for brigade combat teams prior to entering a combat training center as well as company-level proficiency for units prior to entering the Army’s available force pool in the Army Force Generation Cycle.

“We are including an infantry battalion from the Puerto Rico National Guard in the Illinois numbers,” Leighton said. “The 33rd Infantry Brigade Combat Team includes five battalions with companies from the southern tip of Illinois all the way up to Woodstock near the northern border that will be a part of this training.”

The exercise features a variety of scenarios and training environments designed to test the Soldiers, Leighton said. The exercise venues are located throughout the Fort McCoy range complex, including large maneuver areas on North and South Post.

“This is a large exercise,” Leighton said. “Having this training at Fort McCoy is definitely good for us, too. It is fairly close to Illinois, so there is a cost savings (in transportation) and a time savings there, as well.

“Plus, Fort McCoy has everything needed to conduct an exercise like this,” he said.

Many of the service members training in this XCTC Exercise will be training at a later date at an Army’s Joint Readiness Training Center.

Fort McCoy has supported America’s armed forces since 1909. The installation’s motto is to be the “Total Force Training Center.” The post’s varied terrain, state-of-the-art ranges, new as well as renovated facilities, and extensive support infrastructure combine to provide military personnel with an environment in which to develop and sustain the skills necessary for mission success.

Learn more about Fort McCoy online at www.mccoy.army.mil, on Facebook by searching “ftmccoy,” and on Twitter by searching “usagmccoy.”