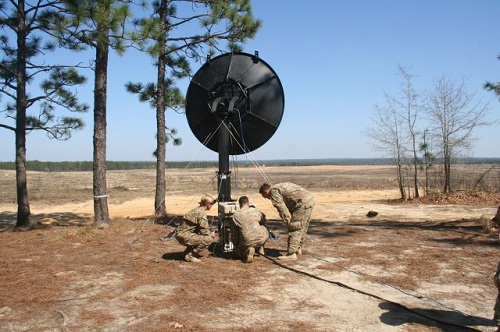 FORT BRAGG, N.C. (April 5, 2016) – Suppose you are supporting an early entry Global Response Force (GRF) mission; which network equipment would you rather fly in with: two large sheltered vehicles that take up critical cargo space in your C-17 aircraft, or a few carry-on transit cases that provide 12 times the bandwidth?

“As a GRF unit, what we take with us is critically analyzed because whatever we take, we have to leave something else behind,” said Cpt. Alan Adame, C Company commander, 127th Engineering Battalion, 1st Brigade Combat Team, 82nd Airborne Division, a GRF unit . “If you take a vehicle with a shelter and it tows a mounted generator trailer, then that is potentially cutting off an artillery piece, a military intelligence piece, a radar piece; something else is being excluded from the fight [to make room on the plane for that equipment].”

“It’s a complex world that we fight in, but the solution to mission success for rapidly deployable units like the GRF is simple: the more situational awareness we can provide, with equipment that is smaller, stronger and faster, the greater the chance for mission success,” said Lt. Col. Mark Henderson, product manager for WIN-T Increment 1, which manages the SigMod suite. “Each component of this equipment package increases performance at reduced size, weight and power to address these requirements.”

“This [toolset] could greatly enhance the current capability of the GRF,” said Maj. Martin Schmidt, requirements officer for the Rapid Equipping Force, which provides accelerated procurement of capability to unique forces such as the GRF. “The Army is trying to make everything expeditionary so that the warfighter can hit the ground, set up and commence operations as quickly as possible.”

Most mission command systems require a lot of bandwidth to operate and exchange situational awareness throughout the battlefield. To help meet these requirements, a component of this expeditionary tools set, the new TRILOS radio, provides a 12 times increase in bandwidth over the current line-of-sight capability known as the High Capacity Line Of Sight (HCLOS) radio.

“With TRILOS now we are connected and we have a lot of bandwidth that we can share amongst each other, and that generates options for the commander,” Adame said. “Now we can have all these mission command systems, critical applications, which are very bandwidth hungry, including air space management and full motion video feeds from the Unmanned Aerial Systems, all of that can be used to support those first jumpers. And that is something that wasn’t readily available before.”

TRILOS is packed in a few deployable transit cases providing a significant reduction in SWaP, compared to the HCLOS radio, which requires two sheltered-vehicles and two large antennas to relay information. Additionally, not only does TRILOS provide point-to-point communications, but unlike the HCLOS, it also provides point-to-multipoint (signals to multiple locations) for increased capability, situational awareness and operational flexibility.

Complementing the TRILOS, and extending network range even further, the Troposcatter (Tropo) Lite provides beyond-line-of-sight (BLOS) capability without using expensive and limited satellite resources. Soldiers can bounce (or scatter) signals off of the troposphere much like skipping a stone on pond, or they can refract signals off of objects such as mountain tops, extending signals over terrain obstructions like trees and mountains, which can inhibit LOS communication. The Tropo Lite is deployed in transit cases and is significantly smaller than the legacy Tropo systems for increased unit agility. One of the biggest advantages of Tropo Lite is that it provides lower latency than satellite systems. This low latency, long-range BLOS backhaul can be used for mission critical Command, Control, Communications, Computers, Combat Systems, Intelligence, Surveillance and Reconnaissance (C5ISR) and patriot missile fire controls, which require ultra-low latency to ensure accurate fires timing .

“This suite of Signal Modernization network capabilities provides the flexibility and scalability needed to support a wide variety of operations and mission sets ranging from GRF to long term operations,” said Capt. Adrian Smith, assistant product manager for WIN-T Inc 1 extensions group. “And the Army plans to continue to enhance network communications and situational awareness while reducing SWaP to best support the GRF and the rest of the force.”

Not only does some of the new SigMod equipment improve bandwidth and range, but it enables commercial, coalition (through CCE) and intelligence users (through MCN-AE) to connect to exchange voice, video and data information over the WIN-T network. Additionally, CCE provides a Radio Bridging Voice Cross-banding (RBVC) capability that enables radios on different frequencies, or different equipment such as radios or cell phones, to seamlessly talk to each other, which is essential in both disaster response or coalition operations where different players and organizations have their own equipment.

“MC-NAE has a smaller footprint; it’s easier to set up the equipment and faster to access it,” said Staff. Sgt. Tyler Darby, D Company, 127th Engineer Battalion, which supported the MCN-AE during the demonstration. “The faster that we can get intelligence to the ground commanders, whether it be brigade or battalion commanders, the sooner they can start making decisions.”

“With GRF we have seven to nine different tactical mission sets, from decisive action — going in and kicking down doors — to humanitarian assistance, to disaster relief; it just depends on where we get called up,” Sager said. “There is an interest for these capabilities; they enhance the mission command systems and mission command.”