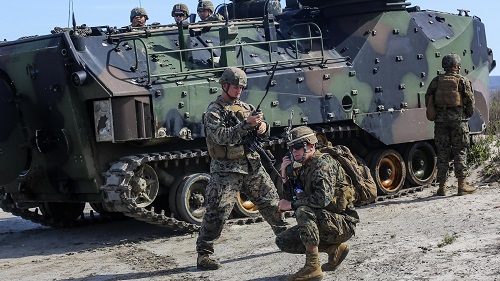 PHIBLEX began with the insertion of reconnaissance and intelligence units ahead of the main-body landing, followed by an amphibious assault launched from the USS Somerset (LPD 25), airborne troop movements, and coordinated attacks from the beach deep into the training ranges of Camp Pendleton.

Over the course of its five-week training schedule, U.S. Marines and sailors, and their Japanese counterparts trained side–by–side to hone their skills in a broad spectrum of military tasks, to include: combat marksmanship, sniper tactics, military planning, fire support operations, amphibious reconnaissance, casualty evacuation procedures and amphibious operations.

During PHIBLEX, more than a dozen Amphibious Assault Vehicles transported Marines from 11th Marine Expeditionary Unit, I Marine Expeditionary Force, and Japanese soldiers from the Western Army Infantry Regiment, JGSDF, from ship-to-shore where they assaulted and secured a simulated contested beach before progressing to additional objectives further inland.

Once on the beach, the Marines and Japanese soldiers established defensive perimeters and executed a series of spearheaded attacks on simulated combat towns using many of the skillsets they had worked on in the previous month of Iron Fist training.

Since 2006, this bilateral exercise has showcased the partnership between the U.S. and Japan, and the dedication to the security treaty between the two countries.

“For more than 55 years, the U.S. and Japan have been security treaty allies,” said Coffman. “Our governments have pledged to strengthen the bond of peace and friendship between our two nations and to uphold the principles of democracy, liberty and the rule of law.”
This year’s Iron Fist saw the addition of a Japanese higher headquarters that partnered with the 11th MEU’s command element and provided command and control for the two forces.

“The bilateral training with the U.S. Marine Corps for Iron Fist has directly allowed us to observe and learn the Marine Corps planning and operations skills,” said Maj. Gen. Shinichi Aoki, deputy chief of staff (operations), Western Army, JGSDF. “The training environment is great here and helped to promote a great opportunity to build our capabilities and practice them with the 11th Marine Expeditionary Unit and I Marine Expeditionary Force.”

Training side-by-side allows both U.S. Marines and JSGDF soldiers to learn about each other, work through communication issues and move around the in same battlespace. By working closely with the JGSDF, U.S. forces have a familiar friend ready to respond quickly and effectively to crises that may occur in the Pacific Region.

“This training is a testament to the discipline and spirit of the fine warriors you’ll see here today and very beneficial to both services as the Japanese Ground Self-Defense Force develops their Amphibious Rapid Deployment Brigade,” said Coffman.

As the U.S. Marine Corps continues to conduct exercises with the JGSDF, their work here at Exercise Iron Fist 2016 paves the way for future coalition success as an expeditionary force in readiness.