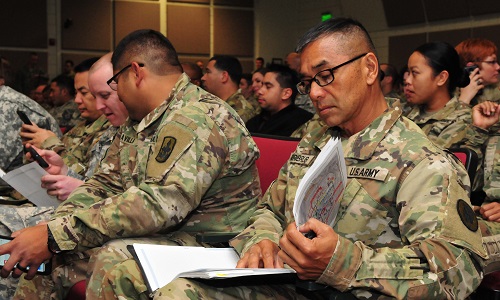 During the exercise, members of the U.S. Army Reserve Command’s 75th Training Command will support the command and control element, the training analyst cell, and the assessments cell.

“We integrate subject-matter experts from other Army Reserve and National Guard units to provide assessments, command and control, and embedded observers to ultimately provide the [participating] units with a take-home packet so they can conduct training when they get home,” said Col. John Zierdt, 75th Training Command, Gulf Division.

“We have over 40 states and two territories represented here and they plan their own training objectives and training plans based on the needs of their states,” said Lt. Col. Henry Capello, exercise commander from Louisiana Army National Guard, during the final planning conference for the exercise in February. “This is an exercise by the Soldiers for the Soldiers.”

Cyber Shield started small and has grown tremendously over the last four years under Capello’s leadership and guidance, reflecting the importance of the cyber domain in today’s rapidly changing environment. That importance extends beyond the Army to vital partnerships with state agencies and others.

“As time has evolved, we realized that we needed to focus on [non-military] networks,” said Capello. “When a governor asks for help, we have to understand what [the problem] looks like. What do your state systems look like? What does your critical infrastructure look like?”

Capello said what makes Cyber Shield so important is that it gives the National Guard the ability to practice its plans so that if a major event such as 2005’s Hurricane Katrina, happens that could have reperecussions in cyberspace and infrastructure, the U.S. government is not figuring out how to react for the first time as the event is taking place.

“We have an opportunity here to get ahead of the threat,” stated Capello.