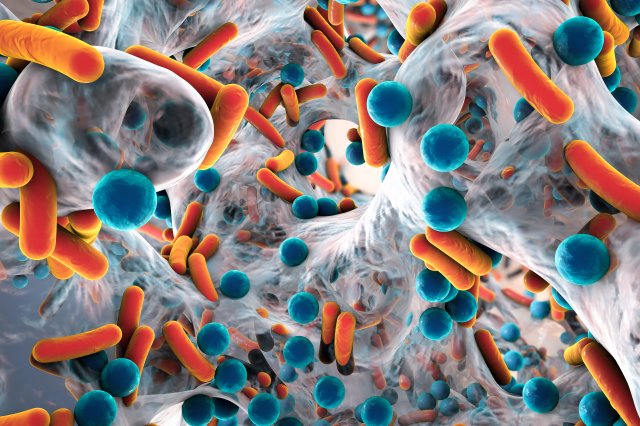 OCTOBER 10, 2019 – Antibiotic resistance is a one of the world’s most pressing public health problems. Army scientists have developed a new weapon to combat super-bugs, which could protect Soldiers and fight resistance.

Bacteriophage, a virus that infects and replicates within bacteria, kill bacteria through different mechanisms than antibiotics, and they can target specific strains, making them an appealing option for potentially overcoming multidrug resistance. However, quickly finding and optimizing well-defined bacteriophages to use against a bacterial target is challenging.

Researchers at the MIT Institute for Soldier Nanotechnologies, identified a way to do just that. The U.S. Army established the institute in 2002 as an interdisiciplinary research center to dramatically improve protection, survivability and mission capabilities of the Soldier and of Soldier-supporting platforms and systems.

“This is a crucial development in the battle against these superbugs,” said Dr. James Burgess, program manager, Institute for Soldier Nanotechnologies, Army Research Office, an element of the U.S. Army Combat Capabilities Development Command’s Army Research Laboratory. “Finding a cure for antibiotic-resistant bacteria is particularly important for soldiers who are deployed to parts of the world where they may encounter unknown pathogens or even antibiotic-resistant bacteria. Wounded Soldiers are even more susceptible to infections, and they may come home carrying these drug-resistant bugs.”

In this study, published in Cell, MIT biological engineers showed that they could rapidly program bacteriophages to kill different strains of E. coli by making mutations in a viral protein that binds to host cells. The results showed that these engineered bacteriophages are also less likely to provoke resistance in bacteria.

“As we’re seeing in the news more and more now, bacterial resistance is continuing to evolve and is increasingly problematic for public health,” said Timothy Lu, an MIT associate professor of electrical engineering and computer science and of biological engineering and the study’s senior author. “Phages represent a very different way of killing bacteria than antibiotics, which is complementary to antibiotics, rather than trying to replace them.”

The researchers created several engineered phages that could kill E. coli grown in the lab. One of the newly created phages was also able to eliminate two E. coli strains that are resistant to naturally occurring phages from a skin infection in mice.

The Food and Drug Administration has approved a handful of bacteriophages for killing harmful bacteria in food, but they have not been widely used to treat infections because finding naturally occurring phages that target the right kind of bacteria can be a difficult and time-consuming process.

To make such treatments easier to develop, Lu’s lab has been working on engineered viral scaffolds that can be easily repurposed to target different bacterial strains or different resistance mechanisms.

“We think phages are a good toolkit for killing and knocking down bacteria levels inside a complex ecosystem, but in a targeted way,” Lu said.

The researchers wanted to find a way to speed up the process of tailoring phages to a particular type of bacteria. They came up with a strategy that allows them to rapidly create and test a much greater number of tail fiber variants.

They created phages with about 10 million different tail fibers and tested them against several strains of E. coli that had evolved to be resistant to the non-engineered bacteriophage. One way that E. coli can become resistant to bacteriophages is by mutating LPS receptors so that they are shortened or missing, but the MIT team found that some of their engineered phages could kill even strains of E. coli with mutated or missing LPS receptors.

The researchers plan to apply this approach to target other resistance mechanisms used by E. coli and to develop phages that can kill other types of harmful bacteria.

“Being able to selectively hit those non-beneficial strains could give us a lot of benefits in terms of human clinical outcomes,” Lu said.

The Institute for Soldier Nanotechnologies engages in fundamental, multidisciplinary nanoscience research relevant to the Soldier. In collaboration with Army and industrial partners, this focused nanoscience research creates opportunities for new materials, properties and phenomena that will directly advance modernization efforts. As an Army University-Affiliated Research Center, the institute’s contract is administered and overseen for the U.S. Army by the Army Research Office.