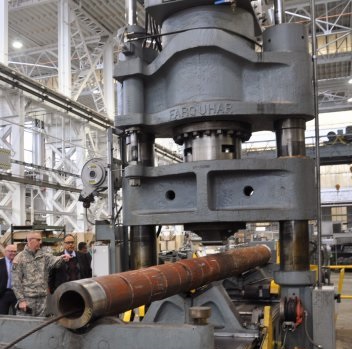 WASHINGTON (Army News Service, April 18, 2016) – The Army is seeking to change the “use it or lose it mentality” as it relates to unit budgets, said Lt. Gen. Tom Spoehr.

Spoehr defined that mentality as “the perception throughout the Army that if you don’t spend all of your money it will be decremented from future budgets because someone thought you must not have needed all of that money — even though it’s not happening that often.”

As director of the Army Business Transformation Office, Spoehr is the proponent for this and other key business transformation efforts, known collectively as: “Changing Management Behavior: Every Dollar Counts.”

This new policy will be executed Army-wide July 1, per the memorandum “Every Dollar Counts.” The memorandum was signed by acting Secretary of the Army Patrick J. Murphy, April 15. Spoehr said more guidance will follow the memo.

“A unit’s budget will not be decremented for the sole reason that they failed to expend their money,'” Spoehr said. There must be some due process for investigating the causes.

The example of due process he gave was this:

Why didn’t an infantry unit spend its entire budget? Did it in fact not need the money or was there something unique occurring that precluded the spending? Maybe they had to go on a two-month deployment to put out forest fires so they weren’t able to execute their training budget. Over what period of time in years will this change of activity occur or be forecast to occur?

In sum, he said, “if there’s no pressing requirement for the money, the unit should be able to turn it over without penalty.”

Soldiers typically say — particularly in the latter part of the fiscal year — “we are 85 percent obligated on our funds or 72 percent expended on our funds,” he said. That’s not an informative metric. This new policy would require better metrics, for example: “I’ve spent 75 percent of my money, but I’ve achieved 80 percent of my training plan.”

Spoehr called this change “an outcomes-based spending approach, where dollars are tied directly to readiness” — the chief of staff and acting under secretary of the Army’s primary focus.

While that change in policy is significant, given that decades-old mentality, there are other big changes in Every Dollar Counts. Here are some of the other business transformation initiatives that will also execute July 1:

Commanders need an understanding of process costs for which they’re responsible, Spoehr said.

Many in the Army do this very well, especially on the medical and industrial sides, he said. They understand this “because they have to live with those costs every day.”

That understanding, however, is not as common in other parts of the Army such as those running a training program or an administration system. They’ve never paid any attention to those costs, he said, providing an example of the Department of the Army Form 31 leave procedure.

No one really knows the true cost of processing leave in a unit, he said. It actually involves 12 or 13 manual steps, from printing out paper and emailing supervisors to annotating it in a logbook, which is then driven over to finance — perhaps six hours of a Soldier’s time per month. “Is that good use of that Soldier’s time? I think not.

“If you look at the private sector, people don’t do that,” he continued. No Soldier should want that, “especially today’s youth. They know intuitively better.”

The policy will incentivize Soldiers to improve these and many other processes that occur throughout the Army every day, Spoehr said, adding that the leave taking process will become automated.

Commanders are being directed to encourage both stewardship and innovation in their units, he said. Every Soldier can contribute to this effort to find ways to save money or do things differently.

Also on July 1, headquarters commanders will establish performance measures of their staff at the two-star level and above for their commands, Spoehr said.

For instance, at U.S. Army Recruiting Command, the commander might want to improve the command’s methods for identifying qualified and motivated talent, he said. The commander at Tank Automotive Research, Development and Engineering Center, for instance, might set some level of performance standards at their depots.

Many commands are setting these performance levels already “but that’s not universal behavior in the Army,” he said. This directs commanders to put in place a number of performance measures for their particular command and track and improve performance. “We aim to make this Army wide.”

Leaders and organizations which demonstrate exemplary stewardship and innovative ideas “will be rewarded,” he added.

The Army is acquiring powerful business software that will help power Army business transformation and Every Dollar Counts, Spoehr said.

“We don’t talk much about that. We have one of the best and most comprehensive suites of business software that’s ever been fielded in the federal government, and the best in the Department of Defense,” he offered. This software will help to “modernize all our back-office functions like payroll, human resources, logistics and the Army’s industrial base.”

The software, called the “Integrated Army Business Suite,” will be fully operating by fiscal year 2018. That is when its final component, the “Integrated Personnel and Pay System,” goes online, he said.

Some of the things that software can help uncover might relate to both cost and readiness. Medical data could be used to find where Soldiers get injured most frequently in their first three years in the Army, for instance. Or logistics data could be parsed to discover which parts are needed most frequently for different types of vehicles, and at what point in their lifecycle.

“We’ll have an ocean of data,” he said. The next step would be training Army personnel in pulling what’s needed from that data.

In some places, the Army is still using software acquired in the 1980s, he said. “In FY14, we retired 45 of these legacy systems, and in FY15 we retired 92. So we’re pushing these old systems out.”

Spoehr said his office is the enterprise advocate for new software capability. While the software will be customized for its users — for instance for logistics, there’s the Global Combat Support System – Army — it will all be subsets of one giant system.

The Army’s “Every Dollar Counts” program is fairly new. But the Army has other programs that have been on-going for years now, which tie in with that effort. Lean Six Sigma, for instance, contributes to process improvement and the re-engineering of business approaches and methods, Spoehr said. Over 14,000 people in the Army have been trained in Lean Six Sigma.

These personnel “are empowered to go out and find problems for commanders and then diagnose how to fix them,” he said. “In FY15 we validated $800 million in savings and cost-avoidance in a number of areas.”

U.S. Army Materiel Command came up with a new way to recycle armor-grade metals for upgrades to Abrams tanks for instance, he said. “We didn’t have to buy it and that alone saved $72 million in FY15.

Another area where cost savings are being realized is looking at common contracts, he said. So if they have three or four overseas bases and they all need security support or trash removal, there are ways to lower costs by putting as many services as possible on the fewest number of contracts.

Reducing the size of division, corps and Department of the Army headquarters has also been a priority over the last several years, Spoehr said. The original goal was a 20 percent reduction, then the target shot up to 25 percent. Spaces saved there are then plowed back into the operating force.

“Our typical behavior when we cut spaces is to cut the lowest paid workers. We did some analysis to find out that our Army headquarters had become middle heavy,” he said. “We had 10 echelons in our headquarters and had 50 percent of colonels and GS-15s who were reporting to another colonel or another GS-15. We deliberately went through DA headquarters reducing that judiciously.”

Now, he said, supervisors manage about eight people, which also happens to be a typical industry standard for supervisor responsibilities.

Another example of headquarters size reduction involved looking for which responsibilities were more meaningful than others to mission. It was “an eye-opening experience” to find that one of the sole functions for many people was attending meetings as representatives for their boss, he said. This happened on multiple occasions.

If the Army were ranked alongside private sector companies, Spoehr said, it would land at 10 on the “Fortune 500” list of companies. The Army has “revenue” from Congress totaling about $126 billion a year. Just one percent of waste on that kind of money comes to $1.26 billion.

“So there’s opportunities in an endeavor this scale to make a huge difference,” Spoehr said. “I have a license to go around the Army and try to bring in better business practices to make the Army better, where it’s appropriate. Better business practices might not be appropriate in a platoon taking an objective, but most everywhere else there’s opportunity to make our Army more businesslike and more effective. Every dollar we save by making the Army more efficient can be put back into maximizing readiness.”