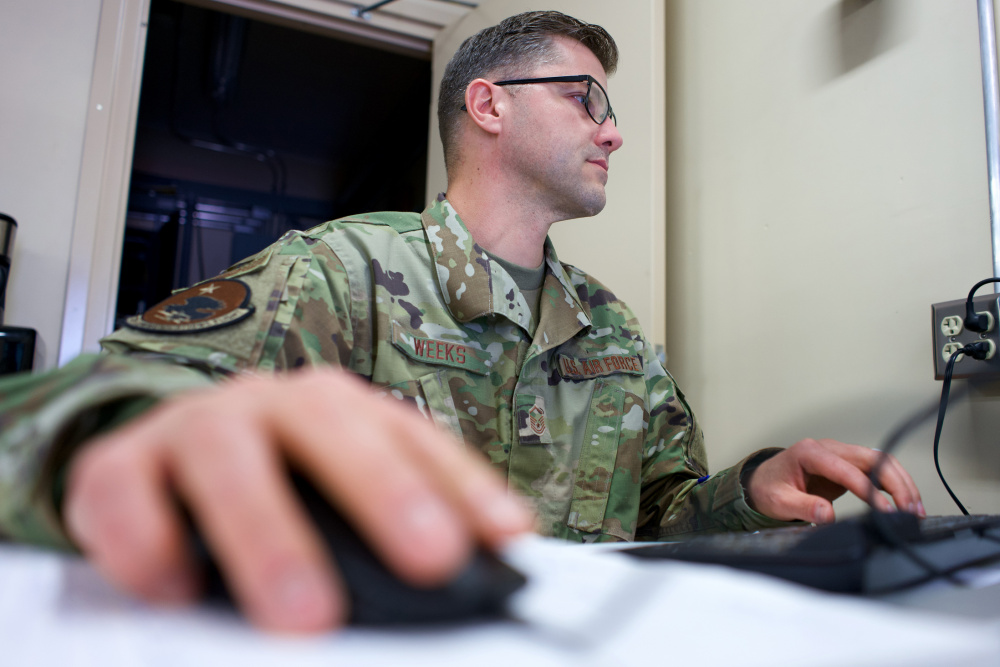 Alaska Air National Guard Tech. Sgt. Scheunemann, 176th Communications Flight, said the exercises fielded a friendly “Blue Team” and an opposing “Red Team” that simulate a battle in one of the most elusive warfare domains: cyber.

“Tomorrow’s battle is going to be fought, sometimes on the battlefield, but a lot of times it will be fought in cyberspace,” he said. “So, kind of getting away from traditional military mindset and focusing more on network operations is going to be crucial to our success as a nation going forward.”

Cyber Shield 21 is a concentrated effort to develop, train and exercise cyber forces in the areas of computer network internal defensive measures and cyber incident response. Cyber Shield 21 brings together about 800 of the nation’s top cyber defense professionals from National Guard Soldiers and Airmen to various governmental, nongovernmental and industry partners in a hybrid in-person and online environment.

Alaska National Guard’s cyber warriors from the Army National Guard, 168th Wing and 176th Wing participated in the exercise at Joint Base Elmendorf-Richardson in a facility purpose built for cyber training.

“Cyber incidents are an ongoing and substantial threat in 2021; America’s power plants, food supply, water supply, health care, law enforcement and defense sectors have all come under attack,” said Army Gen. Daniel R. Hokanson, chief of the National Guard Bureau, during a media roundtable June 29. “These cyber threats extend our adversaries’ reach across borders and time zones and it could have devastating consequences.”

Scheunemann, a member of the Red Team who has years of information technology and cybersecurity experience in the civilian sector, said the exercise underlines how critical the cyber domain is.

“This is second time I have participated in Cyber Shield, and both times it’s been real eye opening from my perspective how capable some of our adversaries are and how dangerous the cyber realm is,” he said.

There have been attacks or attempted attacks in every U.S. state. Though the National Guard response isn’t needed for every attack, cyber defense experts stress the importance of planning and training together.

“Cyber Shield is special because it integrates all levels of government and utilities, high-tech industry, law enforcement and other partners,” said Air National Guard Maj. Gen. Rich Neely, a master cyberspace officer and the adjutant general of Illinois. “It has been described as kind of like a pick-up basketball game where the teams choose their best players, both in the military and outside the military, and bring them along.”

Senior Airman James Gilchrest, 168th Communications Flight Airman and a member of the Blue Team, said the exercise simulated National Guard support of a civilian infrastructure agency under cyberattack. Because the assets didn’t belong to the military team, the group’s efforts had to be closely coordinated with their civilian counterparts during the week.

“A lot of it was up channeling information to get the ability to do some of the things we were able to do, like disabling a user account that is showing suspicious activity,” he said. “There are a lot of moving parts to the exercise, so we needed to understand what our leaders value as the most important things to focus on because the Red Team is trying to distract us. They want us to focus over here, but the really big thing that is going down can be one or two things that can completely tear down the network.”

Gilchrest said the cyber domain is an integral part of multi-domain operations and is as critical to security as the air, sea, land or space domains.

“Leaders need to be cyber minded in military mission planning, and they need to know cyber terms,” he said. “Everyone needs to stay on top of current events in world cybersecurity.”

“It can be dangerous flying over a warzone, but it can be even more dangerous if you don’t practice good cybersecurity yourself and within your family,” he said.