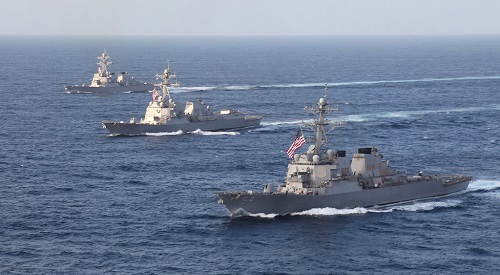 JULY 24, 2017, CORAL SEA (NNS) – The senior chief petty officer results are out, and the forward-deployed Arleigh-Burke Class destroyers and staff of (Destroyer Squadron) DESRON 15 promotion rates in Yokosuka, Japan are far above the Navy average.

The average E-8 advancement rate amongst the DESRON 15 staff and eight destroyers stood at 21.6 percent, beating the Navy-wide advancement average of 13.1 percent.

“It is absolutely the hard work of the DESRON 15 Sailors which provide an amazing leadership environment,” said Senior Chief Sonar Technician (Surface) Benjamin Pittenger, assigned to DESRON 15 staff. “I wholly attribute my recent promotion to the Sailors who are part of the DESRON 15 community and the influence you can have on so many different Navy programs within your warfare area.”

“In 7th Fleet, you are going to get good at your job,” said Denton. “The fast pace and all of the real world experience have been exciting. The opportunity to be forward deployed and gain this level of experience has gone a long way towards solidifying my skills as an anti-surface warfare expert.”

“Being forward-deployed is a good way to learn your job,” said Senior Chief Quartermaster Adam Brandes, assigned to McCampbell. “As a Quartermaster or any other rating, you are going to be involved with more underway evolutions and that is going to help you in your Navy career.”

Accepting orders to DESRON 15, whether on staff or aboard one of its eight destroyers, entail being forward-deployed to Yokosuka, Japan in the 7th Fleet area of operations.

DESRON 15 provides a combat-ready force that protects and defends the collective maritime interests of the U.S. and its allies and partners in the Indo-Asia-Pacific region.