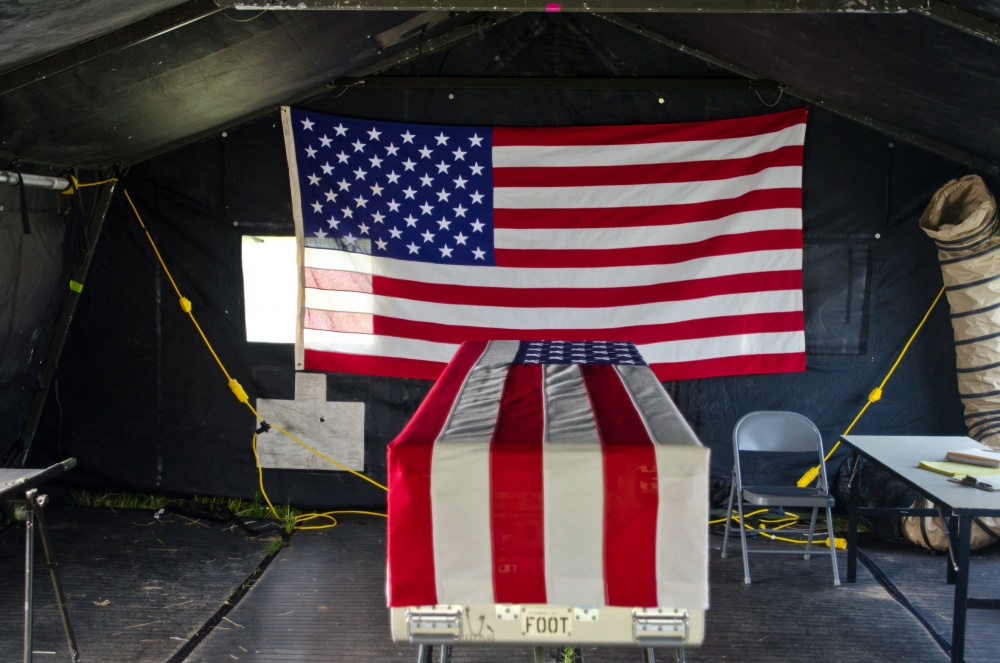 FEBRUARY 22, 2021 – “Nurture the living. Care for the wounded. Honor the fallen. If I justify my actions based on those three lines, it will get done, with or without guidance to aid and assist in honoring a Soldier’s sacrifice,” said Cpl. Zachary Schneck, religious affairs specialist with the 2-104th General Support Aviation Battalion, 28th Expeditionary Combat Aviation Brigade.

Following January’s tragic accident near Camp Buehring that took the life of Staff Sgt. Anthony Bermudez, who was assigned to Area Support Group – Kuwait, chaplains and religious affairs specialists with the 28th ECAB responded immediately to provide support to Soldiers who were grieving the loss of their friend.

Some of those services included cataloguing, processing and ensuring the dignified transfer of the belongings of the deceased, helping organize a memorial ceremony and supporting Bermudez’s fellow Soldiers after they heard the terrible news.

These services comprise a mission that this team, led by 1st Lt. Devon Schoonover, has trained and prepared for. Unable to attend formal training due to COVID-19, Schoonover educated himself on those duties with the help of Sgt. Sarah Cole, a mortuary affairs specialist with 834th Aviation Support Battalion, 34th ECAB, the unit the 28th ECAB replaced in the Middle East.

Since the beginning of deployment, Schoonover has trained religious affairs, admin and medical personnel so they knew their roles in the event of a fallen Soldier.

According to Capt. Sam DeBold, the support operations officer for the 28th ECAB, Schoonover’s work ethic ensured the brigade was ready for any incidents.

“The individual efforts and initiatives of 1st Lt. Schoonover to educate himself in his duties and responsibilities contributed greatly to his preparedness for the mission,” said DeBold. “Just as with any real world incident and the preceding training that prepares us for such events, it ensures that we can stay focused on the tasks that must be accomplished.”

Even though these Soldiers were trained, well-prepared and ensured Bermudez was properly honored, they admit that events like this still take a toll on them emotionally. After the memorial ceremony, the team checked on each other.

“We are always prepared to perform our duties, just like anyone else, but we still hope we never have to,” said Schoonover. “The lasting mental and emotional impact is without a doubt one of the primary concerns when training and executing this task.”

Aside from being an Army religious affairs specialist, Cpl. Schneck is also a firefighter and emergency services chaplain on the civilian side. With everything he has seen in those jobs, he has been to more memorial services and funerals than he could have predicted. But he says this one, for Bermudez, was unforgettable.

“Never before has one impacted me more mentally,” said Schneck. “Seeing the things you see when initial medical treatment is provided, you have to really step back and realize God called you to be there that day. I volunteered for this deployment to help Soldiers through the pain of events like this.”

Although Bermudez was not a 28th ECAB Soldier, the team says they are ready to administer to all Soldiers no matter the person or what unit they are in.

“While this Soldier was not part of the 28 ECAB, he was a Soldier nonetheless and we did lose one of our own,” said DeBold. “We hope this will be the last incident where we need to activate this team for the rest of our tenure here but remain postured and ready if we are called to support again.”