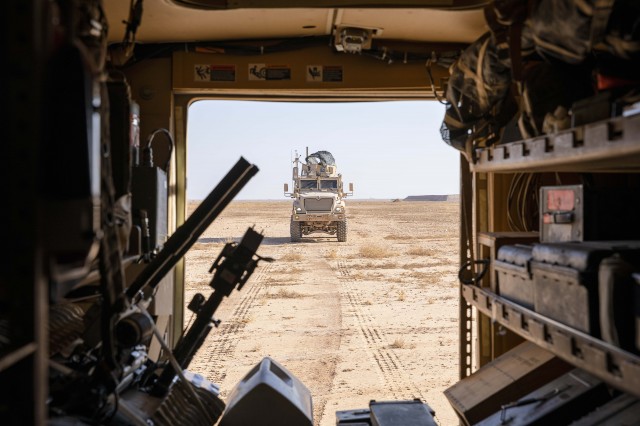 JANUARY 9, 2020 – Although Iranian missiles damaged equipment and infrastructure at U.S. and ally-occupied military installations in Iraq Tuesday, training and defensive readiness paid off in no lives being lost, the chairman of the Joint Chiefs of Staff said.

“There’s sirens that go off on these bases … There’s bunkers and jersey barriers, and there’s places to go hide and all that,” said Army Gen. Mark A. Milley told reporters at the Pentagon yesterday. Milley and Defense Secretary Dr. Mark T. Esper briefed reporters after spending most of the day on Capitol Hill talking with lawmakers.

“We have various levels of protective gear, and we have various scatter plans that do certain things,” the chairman said. “They are all tactics, techniques and procedures — normal defensive procedures that any military unit would do that would come under rocket attack, indirect fire, mortars, large-scale missiles, etc. So in this particular case, Al Asad is a big base — they put 11 large rockets [with] 1,000-, 2,000-pound warheads in them — but we took sufficient defensive measures that there were no casualties to U.S. personnel, coalition personnel, contractors or Iraqis.”

Esper said good discussions took place on Capitol Hill. “We covered a number of issues in both the House and Senate, everything ranging from authorities and imminence, all the way though force posture, next steps, etc.,” he said. “So a very good discussion, a very robust discussion, and you know I thought it was a good chance for all of us to kind of share our views and to consult on next steps.”

The secretary said Iran launched 16 ballistic missiles into Iraq. He said he believes the missiles were short-range ballistic missiles and that the missiles landed in at least two spots. Both landing spots were Iraqi military bases that played host to American and coalition forces, including service members from the United Kingdom, Denmark and Canada.

The secretary said the current battle damage assessment includes loss of such things as tents, taxiways, parking lots and damage to a helicopter, but “nothing I would describe as major, at least as I know it at this point in time.”

While no lives were lost, Milley said, he believes the Iranians intended to cause deaths.

“The points of impact were close enough to personnel and equipment … that I believe, based on what I saw and what I know, is that they were intended to cause structural damage, destroy vehicles and equipment and aircraft, and to kill personnel,” Milley said. “That’s my own personal assessment.”

Esper and Milley both said professional intelligence analysts are working on a final assessment.

The secretary said he remains cautious about drawing any conclusion that if the Iranians intended to kill Americans and did not accomplish that during the attack, they may consider the attempt a failure and try again.