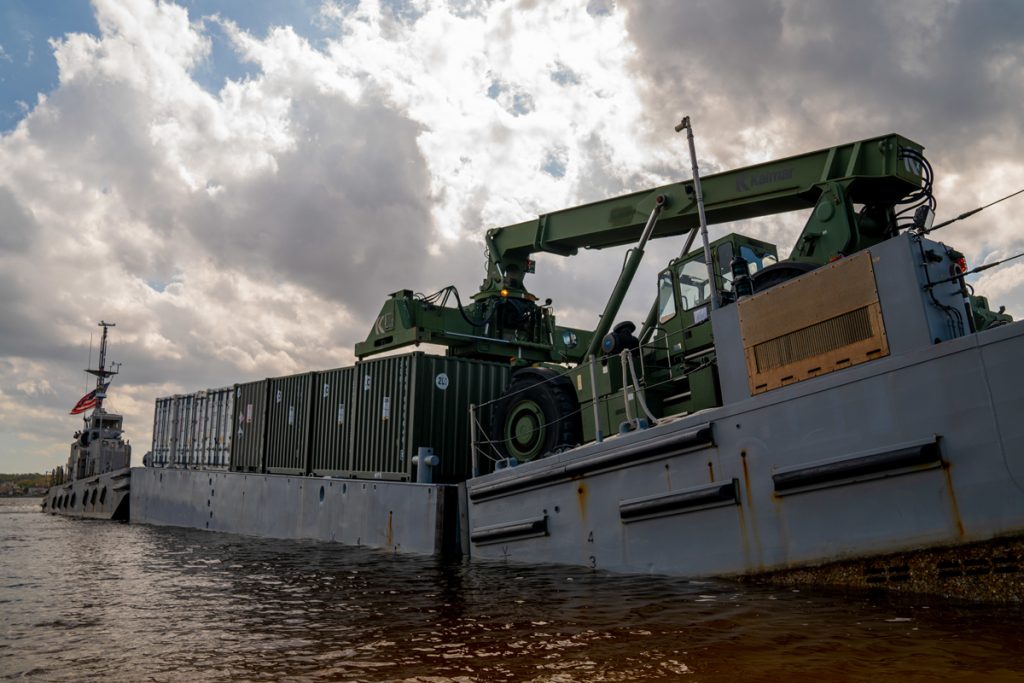 The Rough Terrain Container Handler moves 20-to-40-foot ISO containers and shelters on rough terrain, beaches and other surfaces to assist with land and amphibious missions. The machine can lift and transport objects weighing more than 50,000 pounds.

In September 2020, an upgraded version of the material handler reached full-rate production.

RTCH operates worldwide on rough surfaces, including sandy terrain, and is capable of ordnance ammunition handling operations. The vehicle can be quickly configured for transport by road, rail and marine landing craft, or by air in C-5 or C-17 cargo aircraft.

The vehicle is commonly used during amphibious landings, where engineer equipment operators can employ the RTCH to offload containers, stage them on the beach and push cargo and supplies out to Marines as needed. The machine can also travel through shallow waters and transport ISO containers onto floating bridges called causeways.

“The RTCH has a multitude of functions that helps support Marine Corps missions.The cross-functionality of this system is remarkable.” Jarrett Penn, an engineer with MCSC’s RTCH program

Benefits of Service Life Extension
The Marine Corps began fielding the RTCH in 2006. While the vehicle has served Marines well, MCSC is always looking for ways to improve their technologies and maintain a competitive advantage over adversaries.

“We communicated with Fleet Marines to determine what they wanted to see improve within the Rough Terrain Container Handler,” said Wilson. “We also looked at what the manufacturer could improve on the system.”

After assessing this input, MCSC decided to upgrade the RTCH through the Service Life Extension Program as opposed to field an entirely new vehicle. The RTCH SLEP gives the RTCH at least another 10 years of operation, said Wilson.

The SLEP also saves the Corps time. Instead of beginning at the start of the process—Milestone Decision Authority—the program began at the Milestone C stage, just prior to the production and deployment phase.

“This has been a very streamlined process,” said Jarrett. “Instead of testing every part of this RTCH, which has already been done before, we only had to focus on the specific modifications to ensure those still met the requirements of the legacy vehicle and what we wanted to do with our SLEP program.”

Since MCSC awarded the RTCH SLEP contract in January 2020, both the Army and Navy have joined the Marine Corps’ SLEP to acquire additional machines.

“The Army and Navy are now involved in the program,” said Wilson. “When the Marines, Navy and Army seek the same materiel solution for the RTCH, it benefits all in Acquisitions, Provisioning and sets the Marine, Sailor and Soldier up for success.”

CWO3 Daniel Presley, an engineering equipment officer with 4th Combat Engineer Battalion for the Marine Corps Reserve, served as the RTCH’s project officer with MCSC from 2017 to 2020. As someone who oversaw the RTCH, he emphasized the importance of updating the interior cab.

“The improved ergonomics and the smart layout of the machine controls keep the operator engaged with the machine, which also increases operator efficiency,” said Presley.

The upgraded RTCH also includes the addition of a rear-view camera—increasing the operator’s situational awareness—and an improved electronic control unit. The ECU is an internal computer that controls the RTCH.

“With the legacy RTCH, some ECU’s became obsolete, and we were having a hard time replacing them and finding a solution,” said Wilson. “[The vendor] came up with a solution and provided us with improved ECUs.”

Presley noted how the ECUs were not efficient compared to today’s technology. The improved ECUs provide additional reliability and maintainability.

“The RTCH SLEP electrical system is state of the art, replacing the current obsolete and unsupported electrical system,” said Presley. “This update brings with it the benefit of being a better regulated system, which translates to more machine efficiency.”

“The RTCH is important to the Marine Corps because it is a logistics enabler,” said Presley. “The end result of these upgrades is a modernized machine supported by current technologies that make for a more efficient and reliable platform.”

MCSC projects the upgraded RTCH to field in the second quarter of fiscal 2021.