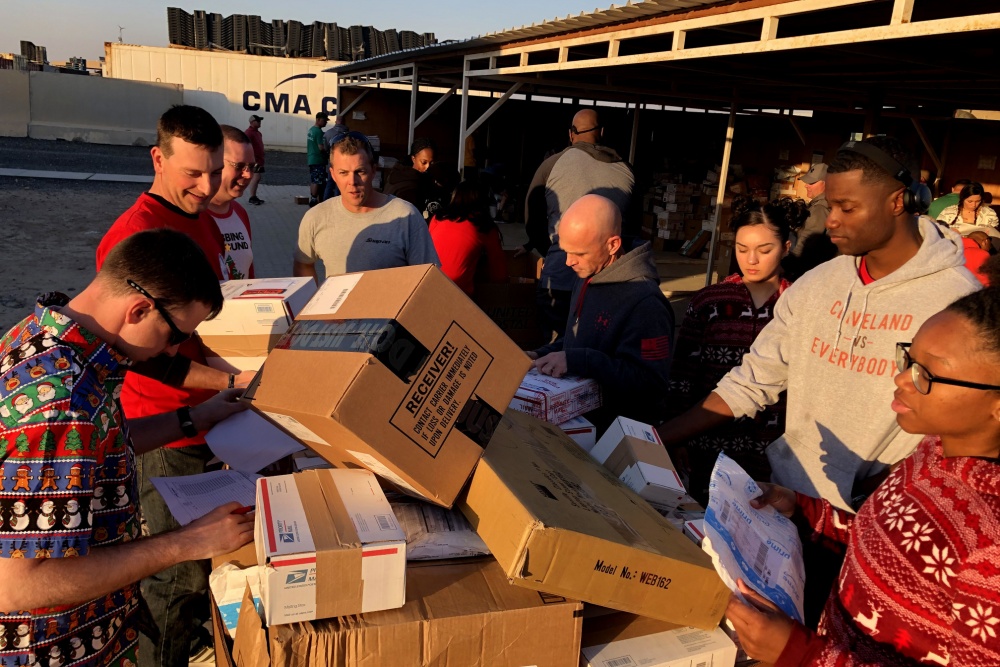 DECEMBER 26, 2019 – They come in all shapes and sizes. Some have handwritten messages on the outside, others have decorative tape or drawings. Whether a padded envelope or heavy cardboard box from a shipping company, it’s not the outside that matters to Soldiers, but the contents and its thoughtfulness within.

U.S. Soldiers deployed in the 30th Armored Brigade Combat Team have received thousands and thousands of letters and boxes from home through the postal system. To ensure these items are distributed in a timely matter, Soldiers serving as unit mail clerks work together almost daily to sort through and distribute mail received in large pallet-sized boxes from the post office.

To keep these packages moving, Christmas Day was no exception, as the Soldiers dressed in their favorite holiday attire Dec. 25, 2019, and sorted packages at the Camp Buehring post office in Kuwait.

“It doesn’t matter the date or circumstances, we are here to collect the mail from the pallets to sort and get it to the Soldiers,” said U.S. Army Spc. Wayne Davis, a human resources specialist and brigade mail clerk in the 30th Armored Brigade Combat Team. “Even during the torrential downpour and flooding here at Buehring last week, we were outside under the awning sorting mail.”

According to Davis, at the unit’s busiest time right before the Christmas, the mail clerks sorted approximately 70 pallet boxes in two days. With each box holding approximately 60 to 80 packages, he estimates they delivered more than 5,000 packages in that 48-hour period.

“If I had to guess how many container boxes we sorted in the month of December, I’d estimate around 700,” said Davis. “This number does not even include the thousands of letters and cards our Soldiers received from families, volunteer groups and schools.”

Davis was assigned in October 2019 to serve as the brigade’s mail clerk. He said he noted a significant increase in mail as the holidays approached, sometimes having to make three trips to the post office to continue sorting and distributing mail.

“We appreciate more than words can say the thoughtfulness and generosity of so many individuals and groups who sent letters and boxes to our Old Hickory Soldiers over the holidays,” said U.S. Army Col. Robert Bumgardner, commander of the 30th Armored Brigade Combat Team, North Carolina National Guard. “We are humbled and grateful by the kindness of so many who let our Soldiers know they are not forgotten.”

Each package when sorted from the pallets has its delivery barcode number confirmed on a spreadsheet by the mail clerk. It is then annotated which battalion the package will be delivered and then loaded onto that unit’s vehicle. Every box must be accounted for, logged, and tracked to the individual Soldier.

“Our Soldiers are definitely being cared for and are not forgotten,” said Davis. “They are getting lots of mail and lots of love from home.”

The 30th Armored Brigade Combat Team is comprised of National Guard units from North Carolina, South Carolina, Ohio and West Virginia. They are deployed to support Operation Spartan Shield in the Middle East.