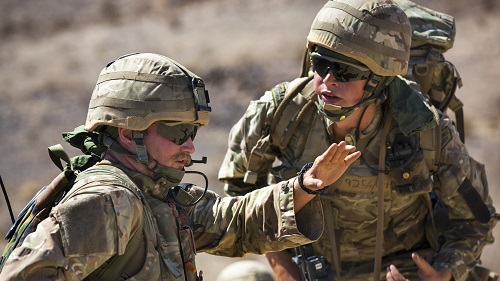 SEPTEMBER 22, 2016, MARINE CORPS AIR GROUND COMBAT CENTER TWENTYNINE PALMS, Calif. – As the Marines approached the hill overlooking the combat town, machine-gunners took their positions to provide suppressive fire while engineers and rifleman made their advance on the facility. As the Marine Corps’ premier combined-arms, live-fire training installation, this style of training is routine at the Combat Center. However, this exercise was made unique by the country the combatants serve. In support of Exercise Black Alligator 16, the Combat Center is hosting 40 Commando Brigade of the British Royal Marines, comprised of more than 1,000 British Royal Marines and 150 Dutch Royal Army soldiers, for the duration of the 45-day training exercise that began Aug. 24, 2016.

“Black Alligator is two things principally,” said Capt. Simon Long, training officer, 40 Commando. “It’s a force-generation exercise, which allows us to develop our training all the way from squad-level to battle-group size live-fire, and it’s also a great opportunity to integrate with the U.S. Marines Corps and conduct joint training.”

With the end goal of achieving battalion-level live-fire in a combined-arms environment, Black Alligator incorporates all assets ranging from infantry and engineers to artillery and close-air support. Each element is tested through a series of validation ranges before they are brought together as a single fighting force.

“We start at the squad-level before moving up to the platoon level,” Long said. “While that is going, we have a lot of different elements holding specialty-arms training; our mortars are doing mortar concentration, our artillery is doing artillery concentration, and our engineers are down in [Marine Corps Base] Camp Pendleton conducting training with 1st [Combat Engineer Battalion.] We then progress and combine those elements in combined-arms live-fire at the end.”

Throughout the exercise, more than 300 U. S. Marines, including artillerymen, engineers and tankers conducted training alongside the coalition forces.

CALFEX, scheduled for Sept. 28 through Oct. 1, brings all the training together with a combined-arms live-fire attack that incorporates infantry, engineers, artillery, mortars, tanks and aviation fires. FINEX has a different focus, tasking the joint force with a clear-in-zone mission against an opposition force of U.S. Marine Corps role-players at Range 220, the Combat Center’s largest Military Operations on Urbanized Terrain facility.

“[These exercises are] where we really test the commando both at the tactical level with the individuals on the ground all the way through with the decision making and of the highest levels of command,” Long said. “We can do things out here that we can’t do in the UK. While we don’t have live-fire urban compounds, we can test all the way up to company and battle-group level.”

According to Mirsch, the Combat Center provided the critical life support, logistics and infrastructure necessary to execute an exercise of this size. This included a variety of equipment drawn from MAGTFTC’s Enhanced Equipment Allocation Pool.

“The equipment drawn by 40 Commando from the EEAP is particularly important to this exercise,” Mirsch said. “It mitigates the need for British exercise forces to ship a battalion reinforced-sized gear set to [the Combat Center] from the U.K.”

Exercise Black Alligator is held annually and will continue to promote operational forces readiness as well as strengthen relationships with coalition partners.

“Most importantly this is an opportunity to come out here and really train as we fight in austere desert environments while working alongside the U.S. Marine Corps,” Long said. “We are really fortunate to receive support from 1st Tank [Battalion] and Charlie Battery with [1st Battalion, 11th Marine Regiment] alongside other assets. Black Alligator is a great opportunity to train as we fight but also to fight alongside our USMC brothers.”