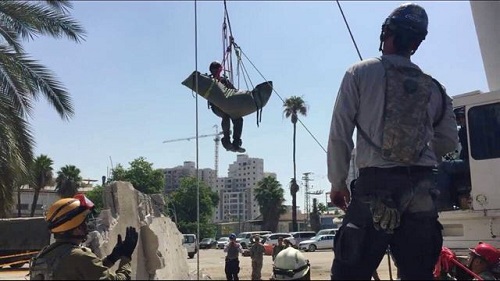 The exercise, hosted by the Israeli Defense Force and coordinated by the Indiana National Guard, strengthened existing bilateral relationships by ensuring interoperability with other military services, and civilian as well as international agencies to improve search and extraction capabilities of all participating units.

“The ability to operate with multiple agencies including international allows CBIRF the capability to be locally and internationally- minded when it comes to our responsibilities,” said Chief Warrant Officer 3 Tracy W. Wilson, rescue platoon commander who served as officer in charge of the CBIRF detachment.

Wilson added the Marines that participated saw first-hand how different the other organizations’ search and extraction procedures were and how they can work together more effectively.

Some of the training conducted included breaching and breaking, search patterns, search markings, and medical staff training (including common injuries associated with collapses).
The culmination of the week was a search and rescue exercise based on an earthquake scenario.