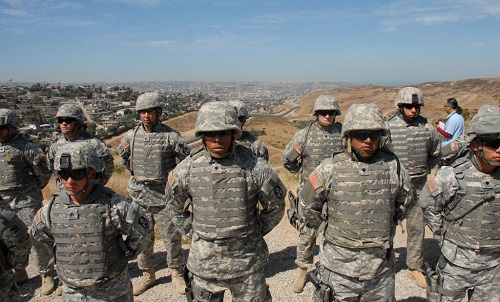 In a written statement Wednesday, Defense Secretary Ash Carter ordered that procedures be streamlined so those who received the bonuses as a result of error or through the criminal behavior of others can seek relief.

Air Force Gen. Joseph Lengyel, the chief of the National Guard Bureau and a member of the Joint Chiefs of Staff, told reporters at the Defense Writers’ Group Wednesday that “the only blanket rule is to do the right thing” for affected service members.

Carter has ordered the Defense Finance and Accounting Service to suspend all efforts to collect reimbursement from the affected California National Guard members. “This suspension will continue until I am satisfied that our process is working effectively,” he said.

He has also ordered acting Undersecretary of Defense for Personnel and Readiness Peter Levine to lead a team to assess the problem and put in place a streamlined, centralized process “that ensures the fair and equitable treatment of our service members and the rapid resolution of these cases,” Carter said in the statement.

The deadline for this process to be in place is Jan. 1. “The objective will be to complete the decision-making process on all cases as soon as possible — and no later than July 1, 2017.”

Lengyel said around 13,000 California National Guardsmen are affected by the issue, which first came to light in 2008.

“The ensuing investigation found that something was amiss in the bonus program,” he said. “Some of it was reenlistment bonuses, some of it was school loan repayment programs and other incentives that keep people in the National Guard.”

The contracts in question fall into four broad categories, the general said. It has been determined that in the case of about 1,100 of the contracts, service members received payments they were not entitled to.

“Whether or not the member knew it is still up for debate,” he added.

About 4,000 contracts passed muster, and another 5,300 were examined and found to have something wrong with the files, “but they are fixable,” Lengyel said.

The last group of about 3,200 are for people who are out of the service, he said, “and those are still to be adjudicated, and they could end up in the other contract bins.”

There are a number of ways to solve this problem, the general said. Officials and soldiers can fix the records. They can get an exception to policy for the debt. They can get the debt waived or, finally, they can repay the debt, Lengyel said.

The vast majority of those affected had no ill intent in accepting the money, he stressed, adding “It’s important that we look at each case.”