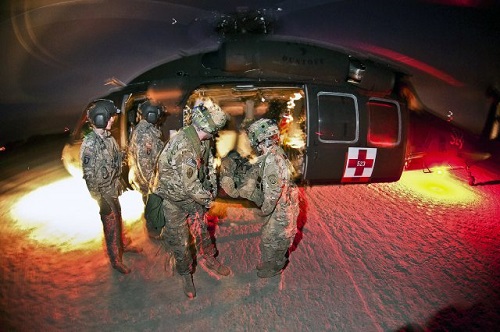 APRIL 8, 2016, REDSTONE ARSENAL, Ala. – On the battlefield, quick medical evacuation of a trauma patient can be the difference between life and death. Approximately 600 H-60 Medical Evacuation Black Hawk helicopters are equipped with carry-on medical devices. These Patient Movement Items, support the MEDEVAC mission that will increase patient survivability.

“Black Hawk helicopters makes it possible for critical patients to fly from the battlefield to a specialized medical facility with their necessary medical equipment including blood warmers, patient monitors, and oxygen ventilators,” said Nathan Proper, AED systems engineer. “To ensure everyone’s safety, each PMI must undergo a series of tests before an Airworthiness Release can be authorized.”

EMI testing is initially conducted on each PMI device to characterize its electromagnetic profile. Excessive radiated emissions may cause interference with aircraft communication and navigation systems.

Explosive atmosphere testing is required to show the PMI is not an ignition source. A failed test can be hazardous when operating in a fuel-air mixture environment. If the PMI is unable to successfully pass this test, the AWR will impose a restriction stating that the PMI device shall be turned off during refueling.

NVD evaluations are conducted on each PMI device to determine if light emitted directly from the PMI itself or reflected from surrounding surfaces impairs the pilot’s ability to safely operate the aircraft.

An EMC test is conducted to determine if the PMI is compatible electromagnetically with all other equipment installed on that aircraft. This ensures proper operation of flight displays, navigation, and communication equipment.

“The test requirements are documented in the Joint Enroute Care Equipment Test Standard, which is a joint agreement between the Air Force and Army that defines the PMI test requirements and methods for both fixed- and rotary-wing platforms,” Proper said. “USAARL develops tests plans in accordance with the JECETS document and conducts appropriate testing.”

Over 75 PMI devices have been authorized for use on the H-60 fleet through AED’s airworthiness efforts. Emerging medical technological advancements will be required to meet the same stringent requirements, Proper said.

“While the latest medical technology onboard the MEDEVAC aircraft increases the survival of the patients, AMRDEC’s dedication to airworthiness and testing of PMI increases air craft and air crew’s safety.”