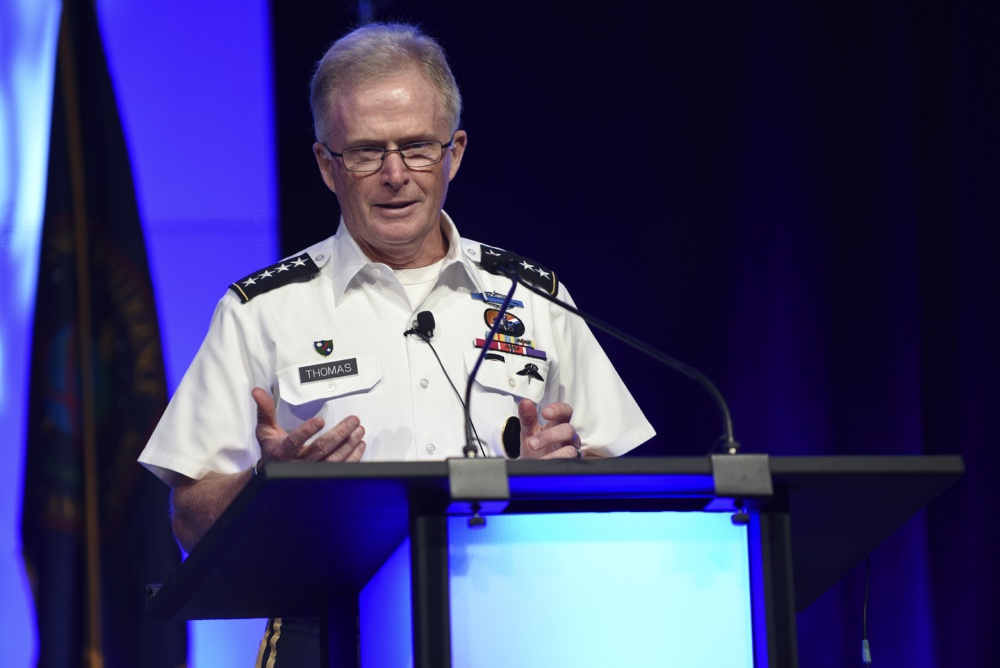 AUGUST 14, 2018, Omaha, NE – The leaders of U.S. Strategic Command and U.S. Special Operations Command discussed the influence of data and technology on warfighting during day one of the 2018 Department of Defense Intelligence Information System Worldwide Conference Aug. 13, 2018.

Gen. John Hyten, commander of U.S. Strategic Command, began his remarks by explaining the similarities between the two commands, describing both as global warfighting commands and critically dependent on information and intelligence.

“If we don’t have intelligence information, all the capabilities [both commands have] are pretty much useless,” Hyten stated. And when you talk about [Strategic Command’s] capabilities—especially the nuclear and space capabilities—if you don’t have the right information in the right place at the right time, that’s when potential adversaries could take a misstep and we could miss that step. And when you talk about nuclear missteps, that’s when the really bad day happens.”

The speed of technological advances and adversarial gains have caused Strategic Command to change the way it fights war and thinks about deterrence, explained Hyten. Today’s strategic capabilities are built in a stove piped infrastructure, but Hyten emphasized the need for a more flexible force.

“Success in the future is going to be when we apply capabilities through whatever domain we have to, through whatever means we have to, and we don’t care where it comes from or where it goes to as long as it dominates the adversary,” Hyten stated. “That will be the next step of greatness for the next great military in the world, and I believe that will be the United States of America. But in order for that to happen, we have to achieve that vision because we have adversaries who have stated similar things.”

Gen. Raymond Thomas, III, commander of Special Operations Command, underscored many of Hyten’s statements and also highlighted the role of data in warfighting, the advances needed to maintain dominance on the battlefield, and the potential risks of technology.

“The ability to effectively and quickly digest, analyze, and most importantly disseminate relevant and accurate information, determines the success or failure of current and future missions—it is mission critical business,” stressed Thomas. “We experience daily the effects of emerging information technologies in both positive and negative ways. On the positive side, we enjoy the advantages of new tools and services that help us cope with ever larger, more dynamic fields of data in which we operate. On the negative side, our adversaries benefit from the proliferation of advanced capabilities…Most of our adversaries are also not burdened by bureaucratic and political challenges that thwart our ability to leverage emerging technology at the speed of change.”

According to Thomas, the recent development of social media and other internet-based sharing capabilities have exponentially increased the amount of publically available information, and may lead to a paradigm shift in how intelligence analysts do their job. Instead of focusing almost entirely on classified information, unclassified information should be the new starting point Thomas explained.

“The time has come to flip the current model on its head,” said Thomas. “The time has come to develop and field tools and tradecraft in analysis that will allow us to begin our effort by understanding what we can from data that is readily and cheaply available. Then we will take our findings and enrich it with information from our classified sensors, sources and methods to provide timely, accurate and actionable intelligence to our warfighters and decision makers.”

Thomas also noted the future potential of machine learning and artificial intelligence to improve and speed the intelligence cycle by allowing analyst to focus less on the rote tasks of gathering and reading reports, and spend more time understanding the information.

Hosted annually by DIA, DoDIIS is the largest intelligence community conference that brings together experts from government, military, industry, and academia in order to tackle the information technology challenges and complexities impacting the mission user.