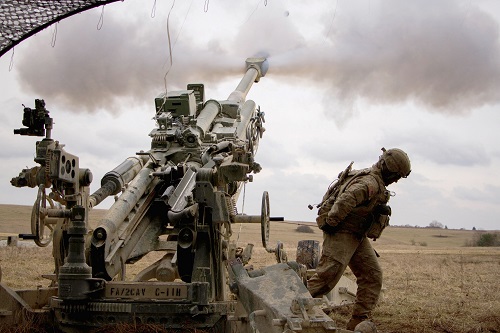 The squadron participated in Dynamic Front II, a multinational exercise that focuses on identifying the capabilities and limitations among theater-level systems by testing and synchronizing multi-echelon fires.

One goal of the exercise was to synchronize 18 artillery guns into one mass fire for Table XVIII qualifications, according to 1st Lt. Scott Marriner, 1st Platoon Leader for Cobra Battery whose platoon was out on the range ready to execute the missions when called to fire.

“Essentially Dynamic Front II is a chance for us to integrate fire and mass fire across not only our own field artillery systems but also those of the Czech Republic and Germany,” he said.

Table qualifications provide artillery units with realistic scenarios in which they can complete fire missions with multiple howitzers. Gunnery tables progress from certifying and firing as a section up to a mass fire with a whole squadron, which can be two guns for a section to 18 guns, known as a mass of fires.

“So a mass of fires is basically the chance for us to synchronize fires from multiple batteries throughout the squadron to hit a target at the same time, knowing that our fires directions center at the squadron level is able to control multiple assets that can mass essentially 18 guns worth of artillery fire onto a target,” Marriner explained.

On March 8, Cobra Battery dug in four M777A2 Howitzers. The rest came from the Czech Republic.

“It is very special for us this time because we will be massing not only two of our batteries but the third battery that we are incorporating into our squads is our Czech allies,” said Marriner. “For massing of fires, it is literally just trying to put as much firepower as we have in our arsenal down range at the same synchronized time.”

As planning and coordination took place at the tactical operations center, Archer and Cobra Battery stayed alert and listened for the call for fire to come over the radio.

“Although we’re working through the mud and muck, things have been going well firing from a bunch of different points,” Marriner said. “We are just one little piece of the puzzle down here at the platoon level firing a couple howitzers. But to contribute to a greater picture of being able to mass fire, it’s been pretty exciting.”