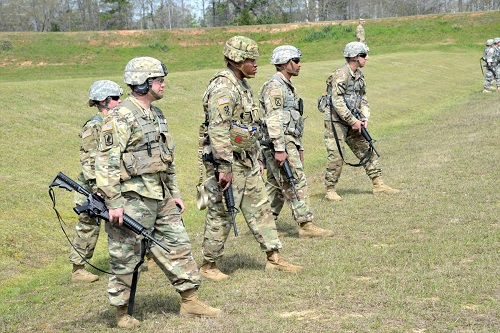 The All Army, hosted by USAMU in conjunction with the Maneuver Center of Excellence, develops marksmanship skills at the entry and intermediate levels and also recognizes superior skill at the highest level. Soldiers compete in separate classes-consisting of cadet, novice, open and professional-based on previous competition experience. USAMU coaches, instructors and shooters provided rifle and pistol zeroing to all competitors.

Soldiers competed individually and on four-person teams in pistol and rifle excellence competition matches, combat rifle and pistol courses of fire, multi-gun courses of fire and an Infantry Team Match.

A team of four drill sergeants and an officer from 2nd Battalion, 60th Infantry Regiment at Fort Jackson, South Carolina, traveled a shorter distance than most other competitors but overcame other obstacles to make their first appearance in the All Army Championship. Fort Jackson is home to the largest number of basic military training units in the Army. It is also home to the U.S. Army Drill Sergeant School, were noncommissioned officers learn to train the Army’s new recruits.

“We could squeeze little more than a week’s worth of actual range time, just enough to zero our weapons,” said Capt. Heather Bilicki, from Greenville, South Carolina, and the team’s captain.

Staff Sgt. Adam Gamche, a new drill sergeant with the 2nd Battalion, 60th Infantry Regiment, said, “I had nearly one week’s notice before this event started that I would be competing and this would be my first time in any sort of match like this. I got to practice on two ranges, one pistol and one rifle, before we came here.”

Despite limited training and short notice, Gamache walked away with the top drill sergeant award, by having the highest score of any active status drill sergeant during the competition.

“It has been a fun but humbling experience competing against some of the best marksmen in the Army, I encourage all Soldiers that if they have the opportunity to be at this event they should do it. I’ve learned a lot and hope to come back in the future”, said Gamache.

The team of drill sergeants were all classified as novice shooters because none had competed in an event like the All Army Championship. Their goal was to compete and learn from all the experienced marksmen at the competition and take what they learned back to their mission of teaching new recruits basic rifle marksmanship.

“You arrive at an event like this thinking you know what it takes to be an experienced marksman, especially when you have been good at teaching new privates coming into the Army how to fire weapons and engage targets successfully,” said Staff Sgt. Davyon Burroughs, 2nd Battalion, 60th Infantry Regiment drill sergeant. “Being here I have learned a lot from all the professional shooters who come here to compete.”

Staff Sgt. Jeremy Douglas, a 2nd Battalion, 60th Infantry Regiment drill sergeant, agreed with many of Burroughs thoughts about the All Army.

“It’s an eye-opening experience, I gained a lot of knowledge about marksmanship, especially shooting at longer distances, and learning to adjust for windage with iron sights,” said Douglas. “I really enjoy this type of environment (competition shooting), but I enjoy teaching marksmanship to the trainees more, it’s my favorite part of being a drill sergeant, and I feel the tools I have acquired this week will only help me be a better teacher.”