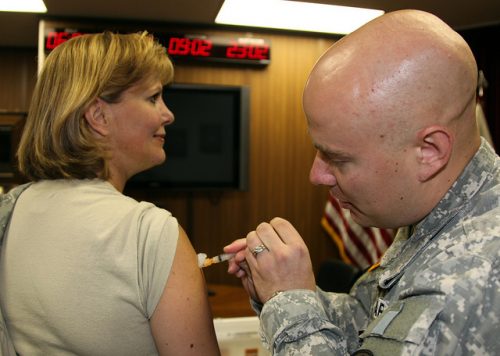 AUGUST 11, 2016, WASHINGTON – The Army estimates it will use about 1.6 million flue shots (injectable influenza vaccine) this upcoming flu season to keep both active duty and reserve Soldiers, civilian staff, and family members healthy.

That’s more than half of the total number of doses ordered by the Department of Defense annually.

For the 2016-2017 flu season, the Army will offer injectable flu shots to Soldiers, federal civilians, and beneficiaries. In accordance with effectiveness recommendations by the Centers for Disease Control and Prevention, the Army will not be offering live attenuated influenza vaccine, known as FluMist.

The Army’s flu shot supplies are expected to arrive at military medical treatment facilities as early as September. The goal is to immunize with flu shots at least 90 percent of service members and health care professionals by Dec. 15, 2016.

While most people may worry about flu vaccines only during the fall and winter months, Army Flu Manager Miguel Rivera Jr. said that, for the Army, preparing for flu season is a yearlong mission.

Each year Rivera, who is assigned to the Army Medical Materiel Agency, a subordinate organization of the Army Medical Research and Materiel Command, works with other preventive medicine experts and logisticians to estimate the number of vaccines needed for the upcoming season.

The calculation starts in February to allow the Defense Logistics Agency enough time to tally the total number of doses needed across the DOD and order supplies.

August is National Immunization Awareness Month, which is sponsored by the National Public Health Information Coalition to encourage people of all ages to make sure they are up to date on the vaccines recommended for them.

“If people do not get their flu shots by December, we still encourage them to get immunized,” said Lt. Col. Charlene L. Warren-Davis, USAMMA’s pharmacy consultant and distribution operations center director. “The flu vaccine is usually viable until June 30.”

According to the CDC, the risks of getting vaccinated are significantly lower than the benefits in most cases. Getting vaccinated also protects others who are more vulnerable to serious flu illness, such as older adults, people with chronic health conditions and young children — especially infants younger than six months old who are too young to get vaccinated.

Also vaccination has been shown to make the flu milder for individuals who do get sick, which may reduce the risk of more serious flu outcomes such as hospitalizations.