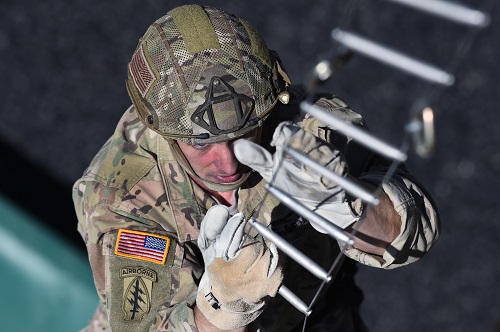 APRIL 15, 2016, FORT BENNING, Ga. – The sun had barely broken the horizon as Army Capt. Robert Killian made his way up the wide gravel road lined with pine trees and scrub brush. The quick rhythm of his boots crunched the gravel in long strides, breaking the stillness of the otherwise quiet morning. Sweat soaked his uniform while the heavy ruck sack on his back shifted back and forth in time with his boots and the steady tempo of his breathing.

Killian, with the Colorado Army National Guard’s B Company, 5th Battalion, 19th Special Forces Group (Airborne), strode easily over the terrain, eyeing a hill looming ahead. Behind him, seven other Soldiers strode just as purposefully toward the hill that stood as a well-worn challenge for all of them, just like the 12-mile ruck march that brought them to it. Each adjusted their gait as the incline began and they continued another day training to compete in the Lt. Gen. David E. Grange Best Ranger Competition, set to begin Friday at Fort Benning’s Camp Rogers.

During the grueling three-day competition teams tackle a variety of physically and mentally demanding tasks, testing their tactical and technical skills, endurance and perseverance.

“We’re shooting, moving, communicating,” said Killian. “It’s everything you would need to do on a battlefield. It’s applicable to everything we would do in a combat situation.”

“One of the biggest qualities I look for during the assessment that we do in November is strictly physical,” said John Burns, the coach for Army Guard teams and the assistant operations officer at the WTC. “I’m not too worried about a guy being able to do a needle-chest decompression or a nasal pharyngeal on the battlefield as much as I am about a guy that can run five miles in 35 minutes.”

The technical skills can be easily refreshed upon during the training, said Burns, while physical endurance takes time to build up.

Those who made the cut in the November assessment returned to the WTC in late January to focus on daily training for the competition.

“The training week is kind of the same every week, but we increase the tempo, increase the distance and the speed every week,” said Burns, a retired sergeant major who served in the 75th Ranger Regiment.

The training includes ruck marches, long-distance runs, work on the obstacle course and rappelling as well as weapons proficiency, medical tasks and a variety of other technical and tactical skills.

The Soldiers training for the competition typically log 65 to 75 miles each week running or ruck marching, said Burns. Those runs, however, often bring their own challenges with them.

“Mr. Burns, our coach, he likes to throw curve balls at us,” said Sgt. 1st Class Jonathan Knea, with the California Army National Guard’s Battery A, 1st Battalion, 143rd Field Artillery Regiment. “We think we’re going to do a five-mile level run, but it turns into a five-mile run with hills and gravel and whatever else he can find.”

For Knea, the long runs and ruck marches give him time to reflect on a number of things, including his reasons for competing.

“During the long runs, the long ruck [marches] you can’t help but get lost in thought about all different kinds of things,” he said. “For a lot of us, I think this is almost a career changer. It’s something that puts us out and spreads us out amongst our peers and, actually, really singles us out as people who want to do the best we can possibly can and be experts in our craft.”

Others had similar reasons.

“You want to be the best of the best,” said Killian, who took second place the past two years of the competition, now in its 33rd year. “That’s what is great about this competition and why I want to come back, you’re competing against the very best in the military. It’s the top 1 percent of the 1 percent. It’s bragging rights. You don’t get any more elite than to be able to call yourself the best Ranger.”

No matter the reasons that brought them to the competition, many see competing as a way to become a better Soldier and bring those skills and knowledge back to their units.

“It’s an amazing opportunity to develop your skills and really tighten up your shot group without putting too much burden or strain on your individual unit,” said Killian. “You come back to your unit a better trained Soldier. You can be that better squad leader, that better platoon sergeant who can show his guys this is what I learned, this is what guys are doing at the top tier.”

While physical endurance and stamina are big parts of the competition, other elements require mental agility.

“You could win 80 percent of the events and still come in second place,” said Killian. “It doesn’t matter if you blow somebody out of the water by a half-an-hour during the road march if you can’t put your weapons together properly. You’re going to lose a lot of points, that’s just the way the competition is.”

However, the competition focuses on teamwork.

“You’re doing it as a two-man buddy team,” said Killian. “So you have to rely on your buddy for certain tasks and to be there with you or to carry you through something you’re weak at. You have to balance each other out.”

Finding that balance among team members is key when determining who is paired together, said Burns.

“I’m really concerned with how well they are balanced physically and how able they are to accomplish a task as a team and complement each other,” he said. “It doesn’t matter how fast his partner can run, he’s not going to be able to come across the finish line until the slower guy gets there.”

With the competition nearing, preparation has shifted from physical training to a greater focus on technical skills and personal strategizing, said Knea.

“At this point, where we are physically is where we’re going to remain physically,” he said. “You can’t cram physical fitness. Right now, I’m trying to figure out in my head a strategy that might work in order to not burn myself out the first day and not have anything left for day two or day three.”

And for the coach, it means reflecting on the past months of training.

“The thing weighing on my mind right now is did I do everything I possibly could,” said Burns. “What did I forget? Is there something I could have trained on that we just didn’t train on? Did we put enough miles in?”

For many, with the anxiousness of the competition looming, centering themselves means thinking back to what it means to be a Ranger.

“I might recite the Ranger Creed in my head and it helps me get on through whatever I’m going through and remind myself that I’ve been through something harder,” said Knea. “I’ve been tested more than I’m being tested in this and this is nothing in comparison.”

The tab signifies excellence, said Burns. But for Knea, it also means something else that will help him through the competition, just as it helped Killian, himself and the other Soldiers up that hill.

“It’s a tab of perseverance,” he said. “It means you can make it through no matter how tough.”