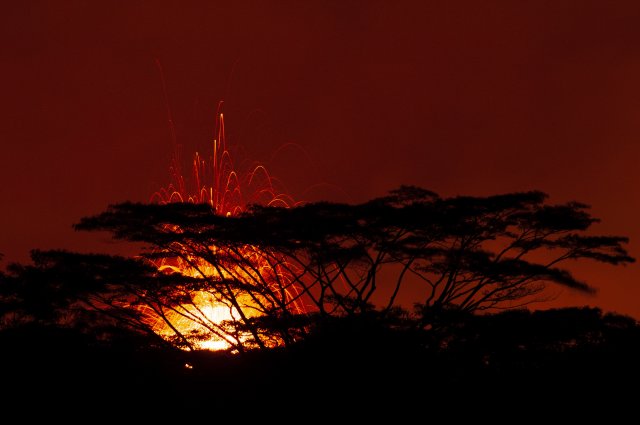 Army Command Sgt. Maj. Elva A. Schaben briefed Pentagon reporters today from the Hilo airport, where the Hawaii National Guard has set up a command center for the effort.

The National Guardsmen use skills honed in combat to aid fellow citizens who are affected by the eruption.

The National Guard mantra is “Always ready, always there,” said Air Force Chief Master Sgt. Ron Anderson, the senior enlisted leader for the Hawaii Air National Guard. It is a part of the force’s DNA to help others, he said.

Anderson said that in addition to Hawaii Guardsmen, personnel from Florida, Guam, Washington, Utah, Maryland and Arizona also helping in the effort.

Schaben has been deployed on Operation Pa’a Mau for about 30 days. “As we stood up this operation on 14 May, the Hawaii National Guard, which includes both Army and Air Guard personnel, were activated,” she said. “Our mission here is to save lives, prevent human suffering and to allow the people affected by volcanic activity to live their lives the best they can.”

The effort on Hawaii’s Big Island also received support from Marines, sailors and Soldiers from the active components. “Part of the mission is to support the Hilo Police Department,” Schaben said. “We have Soldiers providing security. We also have roving patrols going through the area affected by volcanic activity.” A civil support team provided chemical, biological radiation, nuclear and explosives operations monitoring the areas affected by sulfur dioxide and hydrogen sulfide that were created by the volcano, she added.

About 380 Guardsmen have been activated for the disaster. They come from all over the state, including an engineer company out of Maui. The Guard also sent Black Hawk helicopters, supported by the 25th Aviation Brigade, which sent assets from Oahu. Soldiers from Hawaii’s infantry unit and field artillery unit also are helping, Schaben said.

WORKING SAFELY
The Soldiers are working at a safe distance from the fissures, and National Guardsmen do not overfly fissures, some of which are spewing lava more than 250 feet in the air. Other Soldiers are much closer, taking measurements of the gases in the community to assess the safety of the communities affected.

“This is real-world training, boots-on-the-ground training, that is absolutely a force enabler for our folks downrange tied to the war fight,” Anderson said.

More than 200 houses have been lost due to the volcano, and four National Guardsmen are among those who have lost everything, Schaben said. Still, they are out helping their fellow citizens in the midst of the emergency.

Schaben said the Soldiers and airmen could airlift about 400 people out of the area in four hours if called upon by civil authorities. They have not had to evacuate anyone yet, as local police have been able to do so by land.

The National Guardsmen will continue to be on call if needed.

“There is no limit to the operation,” Schaben said. “We are working on a rotation plan, but we will still have Soldiers here because as we transition, the community is still going to need our support.”