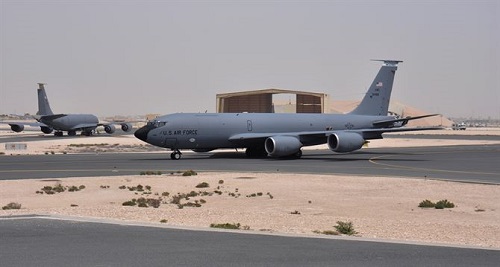 APRIL 1, 2016, AL UDEID AIR BASE, Qatar (AFNS) – A team of Airmen at Al Udeid Air Base, Qatar, is responsible for inspecting almost 50 million square feet of pavement every day, as they support operations at the largest airfield in the U.S. Air Forces Central Command.

The team, the 379th Expeditionary Operations Squadron Airfield Management section, also reviews every flight plan prior to any aircraft departure — there were nearly 3,000 in the first three months of this year. They also inspect airfield signage, runway markings and help manage the airfield driver’s program.

“We conduct daily inspections of all pavement on the airfield to make sure there’s no obstructions that could inhibit flying in any way,” Fulgham said. “We also inspect all airfield markings and signs.”

These inspections consist of sweeps for foreign objects or debris, airfield markings visibility tests and distance evaluations known as 1,000-foot checks, which are conducted to ensure no objects are within 1,000 feet of either of Al Udeid’s two runways.

Fulgham said she’s conducted many inspections of the airfield and often finds FOD. One time, she discovered a portion of asphalt that was breaking apart on an aircraft taxiway.

“If we don’t do thorough inspections something could happen that could prevent aircraft from taking off on time and that puts the mission at risk,” she said. “I appreciate my job, because I feel like we have a real impact toward the mission.”

Another responsibility of the airfield team is managing the 379th Air Expeditionary Wing’s airfield driving program. The team ensures anyone who requires a flightline driver’s license gets the necessary training before driving on the airfield.

“It can get overwhelming because many people out here have never driven on an airfield in their careers and they’re expected to become proficient in three days,” Winter said.

“Safety is magnified on the flightline because of our aircraft,” he added. “If we have an incident that blocks off an area; that will degrade mission capability.”

Team members conduct hourly checks of the airfield to ensure vehicle operators are driving safely according to instructions. They also respond to any incident involving vehicles and aircraft.

During his time at Al Udeid AB, Winter said one driver managed to drive his truck under the wing of a taxiing C-17 Globemaster III, and another driver drove a bus on the runway while a C-130 Hercules was landing. The driver told responders that he saw the C-130 in his rearview mirror, realized he made a mistake and quickly exited the runway.

Both incidents resulted in the suspension of airfield driving privileges.

“The biggest hazard is for a vehicle to hit an aircraft, which is something we try to avoid,” Winter said. “Jet engines are also very powerful and have the potential to flip a vehicle. If that happened, that would likely close down an area until the investigation is complete, which would likely delay flying operations.”

Supporting the mission at Al Udeid AB has been a shining moment for Winter’s career, he said.

“Deploying here has been the highlight of my career,” he said. “I see the direct impact we have every day. We’re serving a greater purpose, supporting Operation Inherent Resolve and keeping our country and families safe. That’s why I joined the Air Force.”