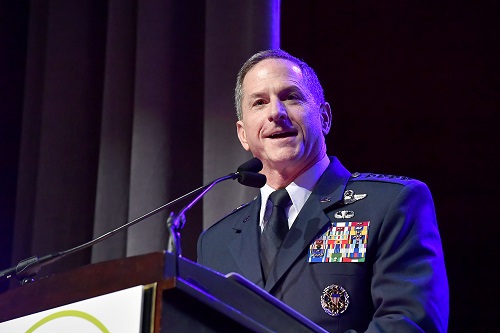 FEBRUARY 14, 2017, WASHINGTON (AFNS) – As the Air Force continues to develop and modernize its forces and equipment, the need for science, technology, engineering and mathematics professionals within the service grows.

In an effort to help develop the STEM professionals of the future, Air Force Chief of Staff Gen. David L. Goldfein and a dozen Air Force senior military and civilian leaders participated in the 31st annual Black Engineer of the Year Awards Science, Technology, Engineering and Mathematics Conference’s Stars and Stripes ceremony Feb. 10 in Washington, D.C.

The BEYA STEM conference brings training, networking and mentoring opportunities to those interested in STEM fields through sponsors and exhibitions. It’s also the stage used to annually recognize African Americans serving in technical career fields, including those serving in the Marines, Navy, Coast Guard, Army and Air Force.

“We were part of the BEYA STEM conference, and we wanted to find an opportunity to have the active-duty admirals, generals and senior executive service personnel give back to the community and help convince young men and women to major in STEM studies,” said retired Vice Adm. Anthony Winns, a BEYA founder.

“This is my first time (being a mentor) and I’ve had a great time,” said Maj. Gen. Daryl Bohac, the Nebraska Air National Guard adjutant general. “What drove me to be here today was just a belief in investing in our future, getting a chance to talk to the amazing young talent that’s here. I’m driven by the idea that what we get to do as leaders is help somebody be somebody they didn’t know they could be, or do something they didn’t know they could do. This is a great opportunity.”

During the recognition dinner, Goldfein presented an award to Lt. Col. Eric Amissah as one of the service’s top-performing African American officers in the STEM community. He is currently chief of Air Force Global Strike Command’s science and technology branch.

“Throughout my career I have found that determination (hard work), the ability to work well with others (teamwork) and a positive attitude can take you a long way,” Amissah said. “The best way to make a difference in the Air Force is to accept challenges, build relationships and stay focused on the mission, which also includes taking care of your team members. I truly give all credit … to my family, AFOTEC leadership and members of General “Fig” Newton’s Chapter of Tuskegee Airmen Inc. To be recognized at this level is a true honor and a blessing that could not have happened without their support and efforts in the community.”

“Over the past 70 years, your Air Force has been breaking barriers – everything from sound, to space, to race, to gender, to the Commander in Chief’s trophy,” Goldfein said. “Standing shoulder to shoulder with our joint teammates, we give our nation an unmatched advantage through our most powerful weapon, the greatest treasure in our nation’s arsenal – our Airmen.”